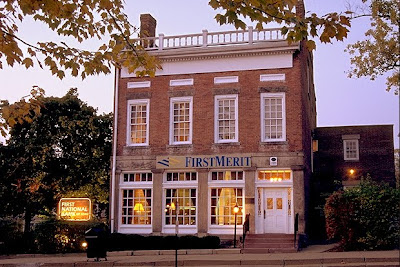 Here is an interesting tactic that I need to employ more often. First up from Cleveland.com, here is a routine story about mass layoffs in the banking industry:


FirstMerit Corp. is eliminating 338 positions and closing eight Northeast Ohio branches as part of a concerted effort to save money.

The moves were outlined by FirstMerit Chairman and CEO Paul Greig at an investor conference in London early Tuesday.

The job cuts are part of an initiative launched last fall to cut costs, and the bank's 2,997 employees were encouraged to make suggestions. About 4,000 ideas were submitted and 341 were used.

All of the cost-cutting measures should save the bank about $15 million the remainder of this year and $30 million next year.

FirstMerit said it's dealing with stricter regulations, low interest rates, a challenging economy and declining branch traffic. The bank, which is the fourth-largest based in Ohio and the 41st largest in the nation, has posted a quarterly profit for 13 straight years and said it wants to maintain that.

The bank has 206 branches and is closing eight of them in the Cleveland-Akron area and is converting a ninth one to drive-up service only. The moves will occur in August.

Just for fun, I Googled "FirstMerit Chairman and CEO Paul Greig" and "Compensation." Wanna know what I found? This little tidbit from back in 2010 on executive pay for the year 2009, also from Cleveland.com:

You read that right, the top five executives at this bank were hauling in nearly 2/3rds of the total cost savings expected this year from laying off 338 employees. It would seem unlikely that the employees FirstMerit were encouraged to be completely honest when Greig put them through the hell of making recommendations to eliminate their own jobs, because the very first recommendation obviously should have been: cut you own fucking pay, asshole. What's even sadder is that second story was sitting right there in the newspaper's own archives, yet they didn't think that Greig and the other executives' insanely high pay was at all relevant to the story.
Posted by Bill Hicks at 6:31 PM