Collapse Is All Around Us 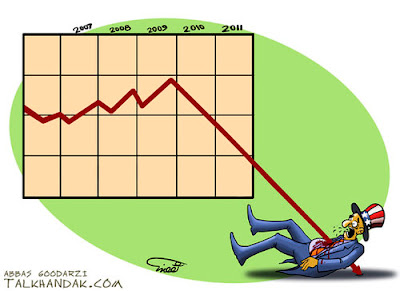 My Blogger colleague over at The Hipcrime Vocab wrote an outstanding piece back on April 29th called, "What If A Collapse Happened And Nobody Noticed?" basically asserting that those in the reality based community who have been patiently waiting around for the collapse to begin should instead just take a good look around them. The whole post is fairly lengthy and well worth reading in its entirety, but concludes thusly:


People often wonder if the Romans knew at the time that their society was collapsing. Even if some intelligent and literate Romans did recognize it, could they have done anything about it? We who know better at least know that we are on our own to deal with this. You know the truth. You don't have to flee to a bunker, and you don't have to die off either (of course we all will someday, but that's a different story...). Don't wait for politicians to tell you the truth about austerity, because they never will. You can see that this engineered collapse is exactly what we've been fearing all this time. No reason to fear the collapse-look around, you're already living though it even as you read these words, and you're presumably still here. Take a deep breath. Relax. Have a beer. Listen to some music. No Zombies Required.

It's a point I've been trying to make around here, but don't think I have ever expressed nearly as well in a single post. It also got me motivated to get off my behind and do something I've been meaning to do for awhile now. Namely, go and document the evidence of collapse that lies right outside my own doorstep.

But first, a little background. I live in Fairfax County, Virginia, a well-to-do suburban burg that lies just west of the Capital Beltway outside Washington, DC. Fairfax County has long sat near the top of the list of wealthiest counties in the country on a per capita income basis. Thanks to the close proximity of the federal government, to say nothing of being the headquarters for a galaxy of Beltway Bandit government contract companies, unemployment around here has remained well below the national average all through the Great Recession, and home values didn't take nearly the hit locally that they have elsewhere. If one is living around here and is particularly numbed by the desensitizing effects of the Hologram, one might actually be forgiven for not recognizing that there is anything unusually bad going on with the economy right now.

Yet the little signs of economic collapse ARE there. All you have to do is open your eyes to them. For instance, one would think a jurisdiction as wealthy as Fairfax County would have little trouble keeping its roadways and public spaces in good order, but one would be wrong about that. Since 2008, the overall condition of the streets and roads around here has deteriorated considerably. More dramatically, the county apparently no longer has the money to keep the medians well mowed. I've lived here for 20 years, and prior to four years ago the grassy center strips were always immaculately kept, maintaining an appearance befitting a large upper middle class enclave.

To show you what I mean, this past weekend I left my house and walked exactly one block out of my subdivision and onto the main roadway that passes by our community. The following series of pictures documents what I see everyday whenever I leave to go anywhere: 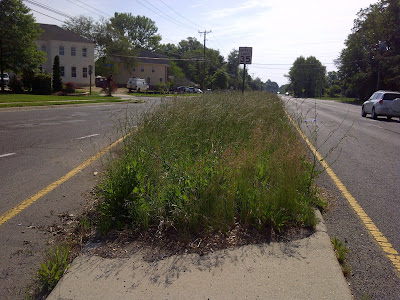 What you are looking at in the photograph above is waist high weeds that have been allowed to grow completely unkempt on the roadway median. And this is not some rural highway, but basically a four lane divided street running through the middle of a residential neighborhood. Note the two houses visible on the left. Those are two brand new, hideously ugly McMansions that have been built just in the last year--the second of which is still under construction. My guess is that each of them probably cost around three quarters of a million dollars despite being placed on quarter acre lots right on the main roadway. What you see in the picture is not an aberration, but is instead typical of how similar roadways now appear all over Fairfax County. 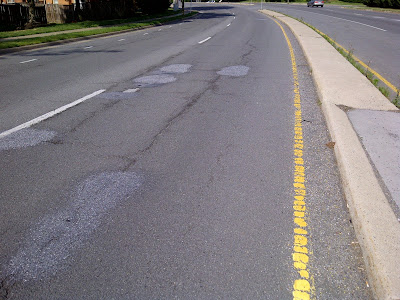 For this second shot, I merely turned around and faced the other way. Here you can see the deplorable condition of the street surface, in which the county has now taken to literally putting patches on top of patches. This street has not been resurfaced in a at least 10 years, and this is what is happening as a result. It also is not an aberration. Although there is still street resurfacing going on in Fairfax County, these days it isn't happening nearly fast enough to keep up with the widespread deterioration of the roadways. 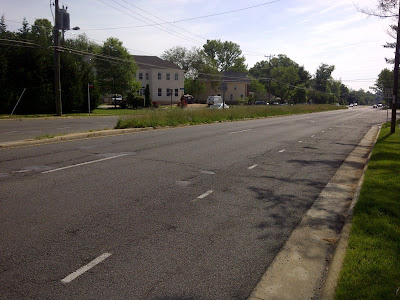 This last shot gives some perspective as to just how high the weeds on the median really are...basically up to above the hood level of the car passing on the opposite side of the roadway. This problem is so bad that there are actually intersections where you have to be careful when making a left hand turn because you can't easily see the oncoming traffic. That's not to say the county won't have this mess mowed at some point this year. Last summer, I think they actually did it twice when the weeds got really bad, and each time left huge mounds of clippings strewn everywhere afterwards.

Again, prior to 2008, you never saw any of this. The medians were mowed probably about as regularly as most people mow their own front lawns. I should also again emphasize that this is happening in a community that has a huge tax base and a very high property tax rate. I can only imagining what is happening in the less affluent areas of the country.

So there you have it...evidence of collapse documented with about ten minutes worth of effort on my part. It took more than twice that amount of time for me to write this post. I will bet that everyone who reads this will upon reflection now notice similar examples where they are. For it should be pretty obvious by now that collapse is not some distant future event, but something that is already happening all around us, every single day.


Bonus: "Crazy guy with a matted beard standing on the corner...shouting out 'End Times Are Here!' but nobody notices...but I can hear him loud and clear"