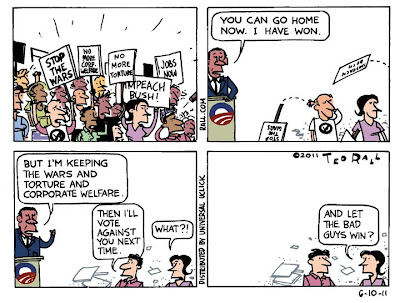 Still think it matters whether Obama or Romney wins the election this November? If so, then please explain this, as reported by the Examiner.com:


According to an interview with National Lawyers Guild (NLG) spokesman Kris Hermes, Chicago police officers raided a Bridgeport apartment complex on Wednesday evening without a valid warrant and detained up to nine people without cause.

The NLG is working in Chicago this week sending monitors to protests at the NATO Summit 2012 to insure activists rights are not violated. They are also functioning as lawyers for anyone detained during the week's activities.

The NLG worked through the night to locate the arrested activists. They were unable to get any information from the Chicago Police Department (CPD) or even any acknowledgement that a raid had taken place.

"We've called police officials at every level trying to find out where they were being held. We were denied any information at all about any people being arrested, let alone a raid happening last night. So essentially these people were disappeared for more than 12 hours until we could finally locate them," said NLG spokesman Kris Hermes.

They were found at the CPD Organized Crime Division police station lock up at 3340 W. Fillmore St. on the West Side.

Lawyers from The NLG were allowed to meet with nine individuals and reported that they were in low spirits, confused about why they were arrested and shackled at both their hands and feet at the meeting. No charges have been filed against them almost 24 hours after their arrest and an Illinois States Attorney at the station refused to meet with the NLG lawyers.

And spare me any bullshit about this being a local matter out of Obama's control. He is from Chicago and his former chief of staff is now Chicago's mayor, meaning he absolutely could influence what happens in that city if he wanted to. The fact is, he doesn't give a shit about civil liberties any more than his predecessor did, and if you vote for him in November thinking that he is somehow on your side you are seriously delusional.

Update: It's now being reported that three "terrorism" arrests have been made in Chicago, though it is unclear if the three detainees are connected to the incident reported above:


Three men loosely connected with the NATO protests have been arrested in Chicago for planning terror attacks on major police stations and businesses downtown, as well as President Obama's campaign headquarters and Mayor Rahm Emanuel's house.

Brian Church, 20, Jared Chase, 24, and Brent Vincent Betterly, 24, have been charged with criminal acts relating to terrorism, conspiracy to commit terrorism, and possession of explosives. The three were arrested Wednesday evening after a raid on a Chicago apartment found them loading Molotov cocktails into the back of a truck. According to court documents, the four had travelled to Chicago from out of town ahead of the NATO protests. They spent the days leading up to the weekend training themselves and planning their course of attack. Their plans for the weekend included:

According to court documents, the men planned to first attack four Chicago police stations and destroy several squad cars with "destructive devices" in order to divert the department’s attention and resources.

While authorities were distracted by those strikes, the group intended to hit Obama’s national campaign headquarters in the Prudential Building, Emanuel’s home in Ravenswood and other downtown financial institutions, prosecutors said. The group had already done reconnaissance work on the Chicago Police Department headquarters in Bronzeville in preparation for the attack, law-enforcement officials said.

Law enforcement records say the police confiscated, "four completed Molotov cocktails... a mortar gun, swords, a hunting bow, throwing stars and knives with brass knuckle handles," plus protective equipment like, "pre-positioned shields, assault vests and gas masks to help hide their identity during the planned attacks," according to the Chicago Tribune. "These men were here to hurt people," said the state's attorney Anita Alvarez. “The individuals we charged are not peaceful protesters, they are domestic terrorists,” said Alvarez.

But the lawyers in charge of defending the three men are alleging they're being set up by the Chicago police department. According to the New York Times report on the story, the lawyers from the National Lawyers Guild in charge of defending the three are going to argue for entrapment. They say a man and a woman who were either informants or undercover officers came up with the plans and provided the three men charged with the explosive equipment.

If this is part of the same action, even if the police account is true, that is some pretty weak tea. We are really supposed to believe that these guys were going to make a direct assault on the massive security wall surrounding Obama or Emmanuel with such puny weaponry?


Bonus: "I've got no patience now...so sick of complacence now"