Both Candidates Are Now Exploiting The Unemployed For Political Gain 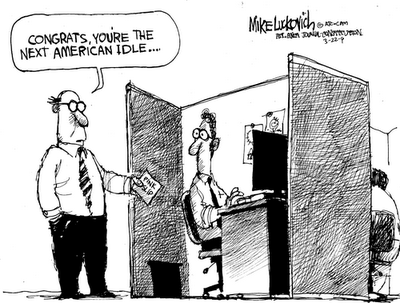 Here's a story from the Atlantic Wire that made my head hurt. Turns out that Hopey-Changey and Wall Street Willard have decided to exploit the considerable economic pain being felt by non-one percenters for their own political advantage:


Meet the television star of the fledgling 2012 general election campaign: the sad sack.

Two handsome presidential candidates have been displaced by hard-knock folks with unkempt beards and furrowed foreheads. These surrogates wear hooded sweatshirts and baseball caps. They gaze mournfully at vacant lots, chain-link fences, and snowy graveyards. This is not “Morning in America;" this is reality TV at nightfall.

The bleak images on television and the Internet contrast with the carefully choreographed, softly lit tableaus that typically feature presidential candidates interacting with rosy-cheeked schoolchildren, comely senior citizens, and pony-tailed soccer moms. But with President Obama’s stewardship of the economy and Mitt Romney’s record at Bain Capital under close scrutiny, their campaigns and allied groups are spotlighting the people who have been left behind.

“Campaigns have to start where the voters are, and we are not at ‘morning in America again.’ We are at, ‘Is the sun ever going to come up?’ " observed Republican media man Alex Castellanos. "Politicians and commercials have very little credibility these days, but real people do."

It’s jarring to see the unemployed take a star turn in Obama's and Romney’s advertisements, because neither man has campaigned on an aggressive plan to put Americans back to work.

By the measure of their own economic philosophies, the candidates’ job-creation plans revolve almost entirely around proposals that are long-term, or small-bore, or both. Obama isn’t pushing a large Keynesian plan to create jobs, such as an FDR-style public works program. Romney isn’t pushing aggressive fiscal consolidation to reduce the government debt he says is holding back growth.

Nearly 13 million Americans remain out of work, and almost 10 million more have either grown discouraged looking for a job or can’t work as much as they’d like. The average duration of unemployment has soared to 40 weeks, and economists are increasingly warning that persistent long-term joblessness can wreak lifelong havoc on workers—and the U.S. economy.

Liberal economist Dean Baker of the Center for Economic and Policy Research and conservative economist Kevin Hassett of the American Enterprise Institute called the duration of unemployment "nothing short of a national emergency" in a New York Times op-ed column they co-wrote last weekend, adding, “It seems clear that neither political party was prepared to deal with the crisis."

On Tuesday, Baker sounded optimistic about the possibility that the candidates’ own ads could spur them to focus more on policies to help the unemployed.

“If the finger-pointing gets sufficiently heated, then it could evolve into pressure to develop a positive program,” he said in an e-mail. “At least that would be my hope. The one thing for sure is that we will not see a jobs program if no one is talking about jobs.”

While the documentary-style ads released this week are unusually personal, presidential candidates have been putting “real people’’ in their ads for decades. A 1952 Dwight Eisenhower spot featured an unnamed housewife exclaiming, “High prices are just driving me crazy!" John F. Kennedy talked with “The Sills family’’ in their living room about the growing costs of food and electricity. A Bill Clinton spot highlighted the struggles of one small town in the face of Bush administration’s policies.

“It seems like the waving flags, the candidate giving a soaring speech, and the fields of grain are not going to be the dominant style in 2012," said Ken Goldstein, president of Kantar Media CMAG, a leading media and marketing company. “Campaigns are trying to figure out [the] best way to shine through all the noise and clutter. Real people speaking in their own words is one of the things that they’re trying.’’

The Obama campaign hit first this week with a new television ad featuring poignant testimonials from former employers of GST Steel, a struggling mill in the Kansas City area bought by Bain Capital in 1993. The mill's 750 workers eventually lost their jobs, but Bain still walked away with a multimillion-dollar profit. Romney had left the company by then but had overseen the takeover.

The campaign’s small ad buy was followed up on Tuesday with a similar spot from the pro-Obama super PAC, Priorities USA, which said it bought $4 million worth of television time in Colorado, Florida, Ohio, Pennsylvania, and Virginia.

The ad stars Pat Wells, a former GST Steel employee in Missouri, who is wearing a heavy coat outside the vacant mill. “He’ll give you the same thing he gave us. Nothing. He’ll take it all," he says of Romney.

Voters were also introduced on Tuesday to Deborah Ragland from Webster City, Iowa, in a new Internet video from the Romney campaign. She’s been looking for a job for two years.

“Every week it’s harder at the grocery,’’ she says wearily at her kitchen table. “You stay the same, everything goes up, so you’re falling behind every month."

As the well-heeled Republican candidate seeks to come across as a regular guy, images of people like Ragland could help generate the populist jolt his campaign has been missing. The campaign also has 30-second versions of the 4-minute video.

“In the Obama economy, 23 million Americans are struggling for work. These are the stories behind the statistics,’’ said Romney spokeswoman Andrea Saul.

All of these new ads feature the white working class—a group of voters both candidates have struggled to connect with and which continues to struggle mightily in this recovery. At the end of 2011, according to the Labor Department, whites with less than a high school diploma had an unemployment rate of 13.9 percent, nearly six points higher than the national average.

Representatives of blue-collar America have real names and faces in these latest ads, and they are telling their stories in their own words.

“Neither candidate is from that group—you have an African-American professor and a venture capitalist," Goldstein said. “These faces in Ohio and Pennsylvania are the ones [who] are going to decide this election."

That last sentence is undoubtedly true. Just as it is also true that for those voters the outcome of this election will not have the slightest effect on their lives either way.

This is also why I bolded Dean Baker's idiotic comments above. Baker's writings, particularly on Social Security and his advocacy of nearly unlimited deficit spending to "kick start" the economy, show him to be one of America's more particularly clueless liberal economists. Neither candidate is going "to focus more on policies to help the unemployed," These media campaigns are nothing more than pure political pandering, and anyone daffy enough to not recognize them as such should not be taken seriously as either a political or economic commentator.


Bonus: "When you put on your story, I'll sigh with relief...whatever you say dear, it's a lie I believe"