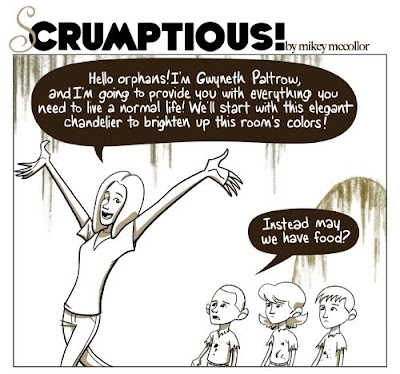 The always awesomely funny Cracked.com posted a biting article this week about why the average person should never, ever trust a celebrity. Personally, I would expand this to include not only major movie stars, musicians and sports figures, but big time politicians as well. The whole this is worth reading, but here is the first of the five to whet your appetite:


Remember that time you were watching an interview with some celebrity, and they spouted off a nugget of wisdom that made you turn to your friend and say, "You know what? Lisa Edelstein is right. We really should alleviate our stress by getting up at 3 a.m. and doing two hours of yoga"? Don't worry, neither does anyone else. But it doesn't stop celebrities from dispensing it like that virtually see-through toilet paper in a truck stop shitter. There are reasons we wisely choose to ignore their advice (or in many cases, make fun of it), but I don't think the celebrities themselves see the problem. Allow me to explain to them that ...

#5. They Come from a World Where Money Isn't a Thing

The number one cause of stress in the average person's life is money, mainly because all of the other things you worry about (your job, your degree) are just other ways to worry about money. So when we get advice from Gwyneth Paltrow on "what to get the man in your life," it's incredibly hard to not burst into fits of psychotic laughter like the black guy from RoboCop. Seriously, take a look at what she suggests and tell me you don't want to punch her in the face:

I mean, I understand that Gwyneth is a special kind of crazy, but is she really so out of touch with the general public that she thinks these are 1) things men want and 2) things the average person can afford without taking part in some hardcore, Class X embezzlement? If my wife brought home any one of those items, I'd immediately assume she had taken on a second job fucking Japanese businessmen for poker chips in Vegas.

It's not a huge mystery that when you enter into that celebrity level of financial security -- let me rephrase that: when you become so effortlessly rich that your life makes fuck sounds -- the enormous weight of that stress just evaporates. I'm not talking about some successful business owner who works around the clock, I'm talking about a class of people who can collect six-figure checks just for showing up to some event whose organizers want a famous person in the audience. After living that lifestyle -- and hanging around others who share it -- for so long, it becomes impossible for you to relate to the average human. But since she still thinks of herself as "just another person," she can't help but come off as catastrophically clueless.

Don't think I'm just picking on Gwyneth here -- the problem is everywhere among that group. When asked about how to keep level-headed and grounded, Goldie Hawn's advice is to stand in front of the ocean. Which I'm sure that, for the multimillionaires living on beachfront property, it's a great idea. Or for the small percentage of people who live close enough to the ocean to drive there. But for the overwhelming majority of the globe, it's just gibberish horseshit spraying from the mouth of an ultra-privileged, out of touch alien.

You can't give advice based on a lifestyle that's only shared by a single-digit percentage of the globe and expect to be taken seriously. "But what about the things that don't take a huge bank account to do, like dieting tips and workout regimens?" asks all of Hollywood in unison. "Surely we could have something valuable to say there."

#4. They Literally Pay People to Live Their Lives for Them

#3. Their Day-to-Day Life Bears No Resemblance to Yours

#2. They Are Experts at Appearing Smarter Than They Actually Are

#1. They Have Nobody to Tell Them They're Wrong


It's just so sad that so many people out there are such blind followers.


Bonus: Bill was never a big fan of people who sell out for celebrity