The Internet's Awesome Power To Humiliate 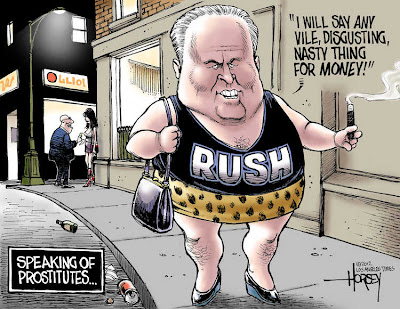 A funny if disturbing story has gone viral on the Internet in the past few days. As I wrote a couple of weeks ago, anyone who is thinking of standing up against injustice in this country needs to be prepared for the vitriol that will be unleashed against them, particularly by the right wing hate machine. In that vein, it seems that a misogynist douchebag down in South Carolina has been whipped up into a frothing of Rush Limbaugh-generated hatred towards Sandra Fluke and was thus compelled to send her couple of extremely vile messages on Twitter. Behold: 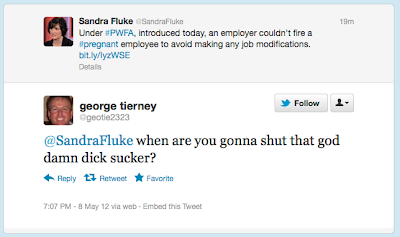 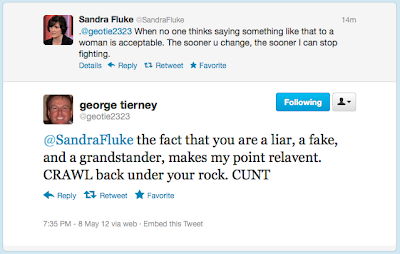 Delightful alleged human being, huh? As it turns out, not only is George Tierney an asshole, but a clueless asshole as well. Here is Firedoglake with the story:


Misunderstanding how the Twitter works, George Tierney of Greenville South Carolina seemed to think he was using his “inside voice” when speaking (twatting) to Ms. Fluke on Twitter only to find out, in a very round-about way, that she elected to retweet to her 36,000 followers what George Tierney of Greenville South Carolina had to say to her and she only did this because she is obviously racist against douchebags who like to shout stuff at ladies on the internet because, as we like to say: virtual manhood is better than no manhood at all.

Anyway, that is where I came in when I screen-capped the whole exchange and made a post out of it, which brings us to last week when George Tierney of Greenville South Carolina decided to google himself on the internet and OH HOLY SHIT! he is now kind of semi-famous for Doing Internet Swears At Ladies and now all that money he spent on eHarmony is just fucking wasted because ladies will not want to go on a date with him ever ever again besides the fact that all he ever wants to talk about is golf which is like the third gayest sport ever. Besides, also: boring.

So eight days after I shared The Magic of George Tierney of Greenville South Carolina he wrote an email to my patron d’art, as follows:

Whoever runs this site needs to take my damn comments off of it. I did not give you permission, nor did you ask me for it. It shows up on google and I will see a lawyer if this doesnt disappear. Ask me before posting bullshit about me. You fuckers had no right.

It is site policy to establish that you are actually George Tierney, and not someone claiming to be him, in order to engage you on this matter further. Please have your lawyer confirm that you are in fact the George Tierney referred to in the post and I will be happy to discuss the matter with him. My contact information is below.

You dont get to make the rules. I am the george tierney that made the comments to sandra fluke, not to you..take it off google. If it goes to a lawyer, it will be settled in court, with me getting paid.

point at and make fun of
be sad about
heh, indeed
…something that someone says in a public forum.

Having said that, and because we are all about trying to help people be better people, we are willing to update the offending post if George Tierney of Greenville South Carolina makes a public apology to Sandra Fluke, and not one of those bullshit, “I apologize if you were offended because I called you a under-rock-dwelling dick sucking cunt” kind of apologies. No, that will not do.

Also, too, stop doing this.

Additionally he could make a substantial but not ostentatious contribution to Planned Parenthood in Sandra Fluke’s name.

Yes, that would be nice. For that we would totally consider updating the Google for him.

Sure enough, this exchange has spread like wildfire and has been picked up by numerous blogs and progressive websites with the bloggers going out of their way to repeat Tierney's name and city of residence as many times as possible. It is one of the most devastating takedowns of a very deserving knucklehead I have ever witnessed.

However, I did want to throw in this little bit of caution. This power of the Internet to put a troglodyte in his place is a great thing...assuming it really was George Tierney of Greenville South Carolina who made those tweets. For just as anyone can create any identity to hide behind on the 'Net, I don't see what would stop a person from creating a fake account using the identity of someone they might happen to have it in for and then go trolling around until they elicit this kind of a response.

Recall that in the Trayvon Martin case, a couple who lived in George Zimmerman's neighborhood received a barrage of harassment when Spike Lee incorrectly put out their home address as Zimmerman's. I don't think it takes too much imagination to envision a scenario where someone who wrongly becomes the target of a virtual vigilante campaign then becomes the victim of real life vigilante violence. Just food for thought.

Update: Glossynews.com scored an exclusive interview with George Tierney Jr. At least in this case, it doesn't appear that he was set up, but it does appear that he is even crazier than his exchange with Fluke would indicate. You can read the whole interview here.


Bonus: Bill Burr takes down a racist on the Internet