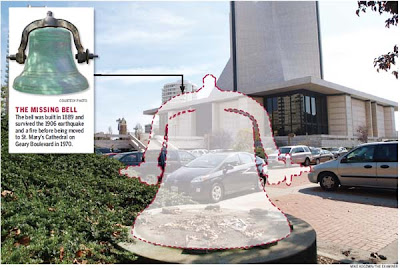 Whatever the declining crime statistics might say, people out there are getting more and more desperate as the Great Recession drags on:


A 5,300-pound bell that survived the 1906 San Francisco earthquake and is worth an estimated $75,000 was stolen last weekend by recycling thieves probably hoping to scrap it for about $10,000.

The theft of this historic bell from St. Mary’s Cathedral is just the latest in a rash of alarming metal thefts across The City. The Police Department recently launched a special investigations unit specifically to combat such thefts.

The prior week, a bronze plaque honoring slain Supervisor Harvey Milk was pilfered from Muni’s Castro station. The plaque, worth $10,000, had been bolted to a wall.

Clearly, there must be a whole lot of scrap metal dealers around who don't ask questions when people drag in obviously stolen artifacts, but that's a whole other issue.


A historic bell reported stolen from the garden at St. Mary's Cathedral in San Francisco last weekend was found near a scrap yard in Oakland on Wednesday, police said.

The copper bell, which weighs several thousand pounds, was reported stolen on Sunday from the church, located at 1111 Gough St., according to San Francisco police.

A police inspector called the bell a "priceless artifact" that was made in 1889, and survived the 1906 earthquake and a fire that burned down the original St. Mary's Cathedral on Van Ness Avenue in the 1960s.

Police received a tip around 2 p.m. today about the whereabouts of the bell. Investigators responded and found it in an open area across the street from a scrap yard near Ninth and Pine streets in West Oakland.

The bell was sitting on top of two beams and was covered by a tarp, according to police.

No arrests have been made in connection with the case.