In the Great Recession Millionaires Win, Everybody Else Loses 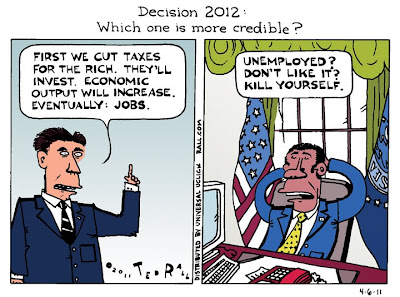 When not accidentally leaking Social Security Numbers and ruining people's credit history, the Social Security Administration occasionally produces reports on the state of the economy. The one that came out this past Thursday was a stunner. Here is the Washington Post with the details:

There were fewer jobs, and overall pay was trending down — except for the nation’s wealthiest. The number of people making $1 million or more soared by over 18 percent from 2009, the Social Security Administration said, citing payroll data based on W-2 forms submitted by employers to the Internal Revenue Service.

Forget the manipulated employment numbers from the Bureau of Labor Statistics. The SSA is simply reporting the total number of jobs based upon the W-2 forms everyone who has a job is required to complete. And that data shows that the number of millionaires is rising while everyone else is screwed. Here are some more details:


Despite population growth, the number of Americans with jobs fell again last year, with total employment of just under 150.4 million — down from 150.9 million in 2009 and 155.4 million in 2008. In all, there were 5.2 million fewer jobs than in 2007, when the deep recession began, according to the IRS data.

More importantly, the article concluded with data that shows how income disparity has been increasing for the past 30 years, a common theme on this blog:


While the average U.S income last year was $39,959, the mean income — the figure where half earn more and half earn less — was much lower, $26,364. This disparity reflects the fact that “the distribution of workers by wage level is highly skewed,” according to Social Security.

Median compensation last year was just 66 percent of the average income, compared with nearly 72 percent in 1980.

So here we see the results of 30 years of supply-side economics bullshit. The sad part is that this increasing economic injustice would never have happened had not slick politicians of both parties sold these policies to many of the same people who have been getting screwed. Those of us who are aware knew this was happening, but it is stunning to see it right there in the raw numbers at a time when so many of our so-called "leaders" continue to spout nonsense about not taxing the "job creators."

My final takeaway is that when 50% of the voting age public makes less than $26,364 per year, they could theoretically turn the whole system upside down were they all to suddenly get registered to vote and start voting the same way for candidates who would look out for THEIR economic interests. It will never happen, of course, but if you want to know why the Occupy movement has the elites nervous, you need look no further than this report.
Posted by Bill Hicks at 8:44 AM