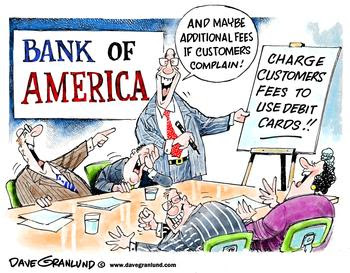 Let's see...Congress passes the $700 billion taxpayer bailout known as TARP to save the big banks and Wall Street from bankruptcy after their own greed and avarice crashed the economy.

Then the banksters had the gall to almost immediately resume paying themselves huge bonuses every year.

Then the banksters had the nerve to start charging depositors a $5 dollar monthly fee to access their own money via debit card.

And the people largely yaw--no wait, as reported by the International Business Times, they're actually getting pissed off this time:


The $5 Bank of America debit card fee has sparked rage that hasn't been seen since the height of the financial crisis in 2008 and 2009.

Bank of America isn't the only one charging for debit cards; JPMorgan Chase and Wells Fargo are testing the concept in select markets and two big regional banks have already announced such fees, according to The Associated Press.

So how bad is it? This bad:


The rage isn't just directed at the $5 debit card fee. Instead, the fee seems to have ignited a fresh round of general anger against big banks.

More than 3 years after the collapse of Lehman Brothers in September 2008, Main Street - still facing an unemployment rate north of nine percent - remains resentful of Wall Street, which is swimming in cash and bonuses.

Some have joined the Occupy Wall Street movement in downtown Manhattan. Others are taking out their anger on Bank of America.

"So let me get this straight. BOA gets bailed out by using tax payer dollars because of their business practices and bad decisions AND now they want to charge me for using my money?" wrote one user on Bank of America's Facebook page.

"We gave you 45 billion of our taxes in bailout money and now you want to disrespect your customers by taking money for using a debit card that MAKES YOU MONEY? Seriously?" wrote another user.

Time will tell, but it looks like we are rapidly reaching a tipping point in which popular anger at the big banks and Wall Street is beginning to bubble over. The media mantra of "green shoots" and "recovery is just around the corner" is becoming threadbare. And all of this is happening just as it appears that the next big economic shockwave is about to strike.

Fasten your seatbelts, folks. It looks like the ride is about to get VERY bumpy.
Posted by Bill Hicks at 12:58 AM