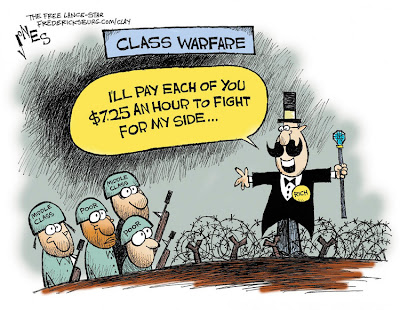 I’ve been waiting during this presidential election cycle for even one candidate vying to challenge President Hopey-Changey to recognize that there is a LOT of political mileage to be gained across the political spectrum from attacking Wall Street and the big banks for the damage they have wrought upon the nation’s economy. Alas, I’m still waiting. The latest candidate to place himself squarely in the corner of the forces that have spent the last 30 years strip mining the wealth of the working and middle classes is Herman Cain. Here’s Talking Point Memo:


Herman Cain had some tough words for the Occupy Wall Street protests, in an interview with the Wall Street Journal: Don’t blame the banks for your financial problems — blame yourself.

“I don’t have facts to back this up, but I happen to believe that these demonstrations are planned and orchestrated, to distract from the failed policies of the Obama administration,” Cain said. “Don’t blame Wall Street, don’t blame the big banks — if you don’t have a job and you are not rich, blame yourself!”

Interviewer Alan Murray asked: “You don’t think the banks have anything to do with the crisis that we went into in 2008?”

I love how this dipshit prefaces his remarks with, "I don't have the facts to back this up..." There was a time in America when a politician might have been embarrassed to actually admit such a thing when opening his big, fat yap. Not anymore, apparently. And his assertion that the banks are not responsible for the deplorable state of the economy that they themselves crashed because this is 2011 and not 2008 would be laughable if it wasn't so outrageous.

You can call the Occupy Wall Street protesters dirty hippies all you want, Herman, and say derisively that they need to get a job. But are you then going to say the same thing to the millions of working and middle class families around the country who are essentially in the same predicament? During this campaign, you've tried to portray yourself as an outsider, but this just sounds like more of the same old shit to me.

Republican front runner and notable Wall Street whore Mitt Romney also showed where he stands this week by calling the Occupy Wall Street protests “class warfare.” Sorry to break this to you, Mitt, but the rich have been waging war on the rest of us for more than a generation now. It’s about time we little people of all political persuasions band together and start fighting back.
Posted by Bill Hicks at 11:50 AM