Sign of the Times: Seasame Street to Deal With the Issue of Child Hunger in America 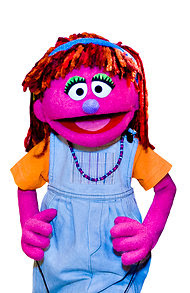 Just a quick addendum to this morning's post. I am a true member of the Sesame Street generation, as the iconic children's television show debuted when I was four years old and I watched it faithfully until even after I was older than its intended audience. Having no children of my own I haven't seen the program in many years, but the following article from today's New York Times caught my eye:


The familiar address of Sesame Street is about to get a new visitor, one who could surely benefit from the sunny days and friendly neighbors there. For a prime-time special to raise awareness about hunger faced by American families, Sesame Workshop, the nonprofit organization that produces “Sesame Street,” has created a new Muppet character named Lily, a 7-year-old girl representing one of the 17 million American children that the Department of Agriculture estimates are “food insecure,” meaning their access to food is limited or uncertain.

“We thought long and hard about how do we really represent this from a child’s point of view?” Jeanette Betancourt, Sesame Workshop’s senior vice president for outreach and educational practices, said on Monday morning in a telephone interview. “We felt it was best to have this new Muppet take this on in a positive way and a healthy way.”

Ms. Betancourt said that she and her colleagues spent time considering all the elements of Lily’s character that would make her realistic but empathetic to young viewers: her style of dress, her voice performance and even mannerisms, like her tendency to look down at her feet rather than make eye contact when she is speaking to other characters.

“She wants to talk about this topic,” she said, “because she knows it will help many other families and children, but it isn’t an easy topic to talk about in the first place.” Still, the tone of the special, called “Growing Hope Against Hunger,” is meant to be hopeful as Lily visits a community garden and encounters popular Muppets like Elmo, Rosita, Bert and Grover as well as the celebrity guests Brad Paisley and Kimberly Williams Paisley.

Okay, that sounds a bit on the touchy-feely side, but it is after all a program designed for little kids. Just another true indicator of the times we are living in.
Posted by Bill Hicks at 7:27 PM