Lindsay Lohan: The Perfect Sex Symbol for a Crumbling Empire 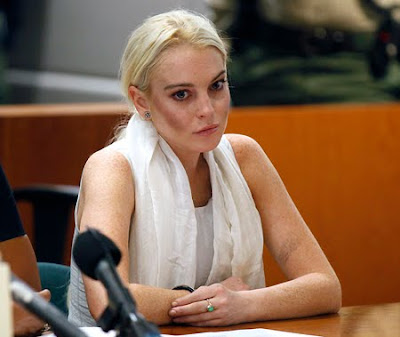 Normally, I try to not pay any attention to the relentlessly publicized exploits of celebrities, especially vacuous no-talents like Paris Hilton and the Kardashian sisters who are famous for just for being famous. There is no doubt that the media uses them to serve as a massive distraction, and I refuse to play along with that particular game. But for some reason, the ongoing tragedy of actress Lindsay Lohan fascinates me, perhaps because her life’s story ties together so many threads of what ails the empire in the early stages of its death throes.

At a very young age, Lindsay Lohan was thrown by her parents into the Hollywood meat grinder that chews up and spits out many thousands of desperate young hopefuls every year. Author Jake Halpern described in his excellent book, Fame Junkies, how so many American children are completely deprived of a normal childhood in the quest to become the next Miley Cyrus, Justin Bieber or Lady Gaga. Their families drag them out to California, often taking on huge debts to enroll them in academies that are supposed to prepare them to be the next big superstar in movies, television or music. These kids spend their whole waking lives taking singing, dancing and acting lessons in between being dragged around from audition to audition where the competition is absolutely cutthroat. A lucky few get their big break and achieve what they are seeking. Most, however, are broken by the system and return back to where they came from having had their youth squandered by their stage parents.

Initially, Lindsay Lohan appeared to have won the fame lottery. She was already modeling at the age of three, and by age 11 was cast to star in her first featured film, the 1998 remake of The Parent Trap. By all accounts, despite appearing in Disney-produced, teen-oriented fluff, young Lindsay actually did have some natural ability as an actress and a singer. This could explain why her career soared to such meteoric heights during her adolescent years.

Unfortunately, instead of nurturing her burgeoning talent, our celebrity-obsessed culture placed her on a pedestal—throwing countless millions of dollars her way while the media stalked her incessantly, all at an age when the biggest worry for most girls is whether anyone will ask them to the prom. Lindsay could scarcely step out in public without her every move becoming a major headline. Seriously, how many of us could ever hope to stand up to that kind of scrutiny, especially at that age?

Sure enough, as the bright lights of fame turned into a white-hot, unending glare, Lindsay’s life began to spiral out of control. She became a habitual user of narcotics, which was bad enough, but then began to commit a series of petty criminal acts for which she’s been repeatedly arrested. And it is here where all of the hypocrisy and class-based injustice of the American legal system has been put on full display.

Because she is a famous Hollywood actress and not a single welfare mother living in a public housing complex, Lindsay’s drug busts have always resulted in her being allowed to go to cushy rehab centers rather than being sent to prison. I would argue that non-violent drug offenders SHOULD be given treatment rather than punishment, but they only are if they have the money to hire top notch defense attorneys. Even more telling is how the actress has so far avoided serious jail time for her other infractions, including twice Driving Under the Influence, driving with a suspended license, misdemeanor theft and repeated probation violations. In one notorious instance, she spent exactly 84 MINUTES in jail to fulfill her sentence on one of her DUI arrests.

Throughout it all, the paparazzi have continued to stalk her, gleefully documenting her many court dates and her rapid physical decline, which has become red meat for hungry tabloid readers desperately seeking an escape to feel better about their own shitty lives. If there is anything idiot Americans love more than breathlessly following the lives of celebrities, it’s heaping scorn and derision upon them should they prove to be frail and all-too-human. It’s even better when the celebrity is a young woman whose sexual exploits, both real and imagined, are the grist for endless speculation and gossip and she can then be condemned as a slut and a whore.

All of this stuff —celebrity worship, media irresponsibility, a broken criminal justice system and insane drug laws--is bad enough, but to top it off like a cherry on a shit sundae comes the unfortunate Lindsay’s parents to display another quintessentially modern American trait: an utter lack of responsibility for one’s own actions. Here’s a quote from a recent interview with her father about her most recent arrest:


"I hate seeing my daughter in cuffs. She belongs in rehab! Why don’t they institute drug testing? Get drug testing involved! Keep her straight! Make sure she’s in an outpatient program. They need to put a sober coach with her! A no nonsense sober coach! I’m sick of this, when she wants to be honest with herself and live up to her responsibility she’ll turn her life around. But she has learned too much of the opposite from her mother," says Michael.

Even though Michael is known about town as being low-key crazy and has willing appeared on Celebrity Rehab, for some reason he seems to think he's knows what's best for Lindsay.

"My mission is to get rid of all the people in her life that are kicking her down. I'm going to eliminate them from her life. I'm going to do all I can...not physically but I'm going to put them in a position where they can't be around her."

Not to be outdone, here is her mother in a separate interview:


“I blamed her friends, her career and her handlers for an (sic) newfound lifestyle of partying excessively. Drinking, drugging and behaving irresponsibly became Lindsay’s way of daily living–and it tore me up inside.”

“How could I deny my daughter the chance of a lifetime? How could I hold Lindsay back from her dream of becoming an actress? So, I listened to others and sent my daughter to Hollywood with a few pieces of luggage and a chaperone.”

Do those quotes not make you want to grab these two clueless morons and slam their fucking heads together? Really, it was Lindsay’s conscious choice to become a model when she was only three years old? For much of her professional career, Lindsay Lohan was a minor, and therefore raising her was their responsibility. They were perfectly happy to cash the big fat checks and bask in the reflected glory of their young movie star daughter. But actually being parents to her? Why, that’s way too HARD, don’t you know.

Despite having international fame and more money than most of us will ever earn in our lifetimes before she was even old enough to vote, Lindsay Lohan’s life is a complete wreck at the tender young age of 25. It will be a shock if she actually lives to see 30. When she does inevitably succumb to that final fatal overdose, you can bet moralists everywhere will be wagging their fingers while National Enquirer readers gleefully soak up every sordid detail of her death. The cable news shows will feature extended career retrospectives and her record label will no doubt release a posthumous album in order to cash in on the publicity. The funeral will be widely televised, and plenty of teary-eyed mourners who never even met her will say how sad her passing is, even if not one of them would have ever deigned to lift a finger to help her while she was still alive.

So there you have it, America. Lindsay Lohan: the perfect poster girl for the type of deranged society we’ve become. She is literally giving her life to keep you entertained and distracted so you won’t have to open your eyes and see how completely screwed you really are. Appreciate her now—revel in her transgressions, laugh at her misfortunes, speculate about who she’s fucking, embrace the feelings of moral superiority that come over you when you look at her mug shots—but be sure to do so soon before it’s too late.
Posted by Bill Hicks at 8:33 AM