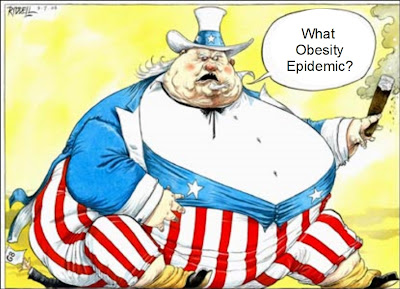 Even if you think you're completely inured to it, sometimes the blatant stupidity of the mainstream media can still take your breath away. That was my reaction upon reading a recent entry in an online column the Washington Post laughingly calls "Ideas @ Innovations." Here's a snippet:


It’s not just the U.S. economy that’s sick and overweight, apparently it’s the workers, too. According to the latest survey on the U.S. workplace by Gallup, roughly 86% of full-time workers are overweight, obese or suffering from at least one chronic health problem. Even before the recession, business gurus talked about “lean” operations, “trimming the fat,” and creating the type of “nimble” corporations capable of taking on their overseas competitors. What if this was more than just clever wordplay? Can we actually jump-start the U.S. economy by asking our nation’s workers to slim down?

First of all, that 86% figure cited in the Gallup poll seems WAY TOO HIGH to me. I know America is suffering from an obesity epidemic, but it seems absurd to think that nearly nine out of ten of us are either fat or chronically sick. Okay, let's fast forward to the part where the article tries to make the link between fitness and the overall economy:

Within the U.S., for example, there is a strong correlation between the states with high rates of obesity and low economic growth. The classic example is Mississippi, which has the highest obesity rate and the highest poverty rate in the country. On a global scale, the World Economic Forum reports that the world's most competitive nations are Switzerland, Sweden, Singapore, the U.S. and Germany. With the exception of the U.S., all of these nations are not exactly known as being friendly to obesity.

Okay, first of all, there is only a link between obesity and poverty in Western nations, particularly the U.S., where the poor in fact have plenty of access to cheaply produced foods that are high in grease, carbohydrates, corn syrup and other additives that make one fat. Go to Africa and Asia, however, and I doubt you'll find a lot of obese poor people. In fact, many of them are instead likely malnourished if not actually suffering from the effects of starvation.

Secondly, those other "competitive" nations cited above do not have huge predatory and politically-connected agribusinesses that incessantly lobby for the right to produce the cheap, crappy food that is MAKING so many Americans--and not JUST the poor--obese. If you really wanted to crack down on obesity in America, the first thing you would do is to start tightly regulating the additives placed in pre-packaged foods and the fat content of fast foods. But that would hardly serve to boost the economy. In fact, it would likely severely constrict the bottom line of the entire American food industry.

The article concludes with a bit of common sense wound together with one of the dumbest assertions I've read in quite awhile:


Could a bag-of-chips-a-day routine be the difference between a double-dip recession and a slow-but-steady recovery? At a time when the U.S. economy is looking a bit flabby and the unemployment rate still hovers around the ungainly 9-percent mark, it might just be worth it to create a workout routine or be more diligent about an existing one.

Yes, obviously everyone should strive to take care of their health. That means eating nutritiously, exercising regularly and getting a sufficient amount of sleep at night. I strongly advocate all of those things.

But to suggest that even if the unlikely happened and a significant portion of the population were to start changing their habits to become more healthy our economy would rebound is the kind of magical thinking one could easily dismiss as completely irrelevant had it not been published by the newspaper of record for the Imperial Capital. You can bet SOMEONE up on Capitol Hill is reading this article, and is right now trying to think a way of using it to deflect the real blame for America's economic ills.
Posted by Bill Hicks at 6:58 AM