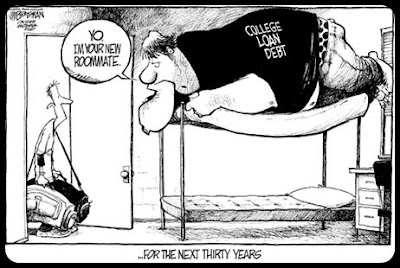 I hope we can all agree that one thing this country needs is fewer soulless little cretins running around with MBA degrees. Remember back in 2001 when we were supposed to get all excited about the inauguration of the first MBA president? So how’d THAT work out, anyway?

Somehow, despite being experts at knowing the price of everything and yet the value of nothing, MBAs have avoided kind of widespread public derision that has for many years been heaped upon lawyers. And now, maybe, just maybe, those whose top priority in life is to make money at all costs are beginning to look at college as being a bad bet in that regard. Here’s Chicago Business with the details:


Applications to most of Chicago's business schools are declining, as the recession makes would-be graduate students more wary of taking on huge education debts in an uncertain job market.

Loyola University's Graduate School of Business, one of the metro area's smaller business schools, posted the biggest drop; MBA applications were down 9.5% this year, to 399 from 441 in 2010.

But Chicago's world-ranked institutions are down as well. At Northwestern University's Kellogg School of Management, 2011 applications declined 5.6%, to 4,974 from 5,270, while at the University of Chicago's Booth School of Business, applications slipped 3.0%, to 4,169 from 4,299.


Hopefully, this is just the beginning of a much larger trend of young people finally waking up to the fact that it makes no sense to saddle themselves with tens or hundreds of thousands of dollars worth of student loan debt to obtain a useless education that will never help them land a high-paying job in this era of permanent economic contraction.

Bonus--here is Bill himself on marketing: