What's the Matter With Canada? 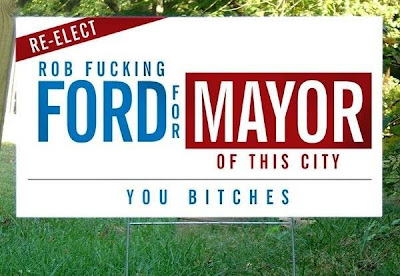 I want to take time out from my constant carping about the many ills ailing the American empire and address my friends from north of the 49th parallel for a moment. You guys are supposed to be the smart ones up there--more thoughtful, more tolerant, less belligerent. We Americans have in recent years provided you with countless examples of what you should strive NOT to be. And yet it doesn't appear that you're at all paying attention.

It's bad enough that you insist upon turning the stunningly beautiful province of Alberta into a lifeless moonscape in order to feed America's insatiable petroleum habit. But now your largest and most prosperous city has gone ahead and elected a pro-sprawl stooge of a mayor:


Rob Ford is Toronto's buffonish embarrassment of a mayor, elected by the suburbs to "end Toronto's war on cars" and "open the city for business," he declared that he would save money by "ending the gravy train" of city spending, only to take office and discover that the only discretionary funding that remained to be cut was to things like well-loved, well-used libraries.

But wait, you haven't heard anything yet:


Marg "Princess Warrior" Delahunty is a character played by Mary Walsh on the comedy-news-show This Hour Has 22 Minutes. It's complicated, but basically she dresses up like a middle-aged housewife, who is, in turn, dressed as a warrior princess, who is, in turn, a political journalist. It actually works really well and has resulted in some of the best political reporting in Canadian history.

To be clear, the emergency that prompted this outburst was that Mayor Ford was in danger of being interviewed by a comedian.


Wow, this doofus sounds like he's ready to enter the competition with Sarah Palin, Michelle Bachmann and Herman Cain as the most out-of-control fevered ego among North American politicians. Seriously, Toronto, how do you elect someone like this? It's not like you have Fox News up there relentlessly destroying voters' brain cells 24/7.

Sadly, it appears from what I tell from my perch down here in Virginia that rather than being appalled and horrified by how America is slowly tearing itself apart, many Canadians are determined to be ever more like us. That's how powerful the allure of our consumerist economic model is, however unsustainable and doomed it might be.
Posted by Bill Hicks at 6:30 PM