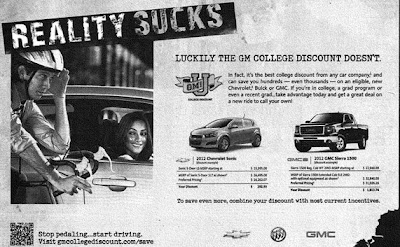 Boy, I sure am glad we taxpayers bailed out GM so it could turn around and run stupid ass advertisements like the one above. Here's the Los Angeles Times with the details:


General Motors Co. is killing an advertisement aimed at college students after receiving complaints that it makes fun of people who use bicycles for transportation.

That ad has a headline stating, “reality sucks” and depicts a nerdy looking guy wearing a helmet and riding a bicycle being passed by a cute young woman in the passenger seat of a car. It then goes on to say, “Stop pedaling … start driving” and provides information about discount pricing for GM products such as the new 2012 Chevrolet Sonic subcompact sedan and the giant GMC Sierra 1500 truck.

The ad ran in a variety of college newspapers and was turned into a poster that was displayed campuses, according to the automaker.

The advertisement was widely panned on a variety of cycling blogs and in complaints to the company.

So why would GM produce an ad like this in the first place? For the same reason that the company is still building SUVs and big ass pick-'em-up trucks even as the cheap oil and gasoline era is rapidly drawing to a close: because the company is run by a bunch of morons.
Posted by Bill Hicks at 6:00 PM