Michigan Cuts Off Benefits to 41,000 Welfare Recipients Just as the Great Recession Deepens 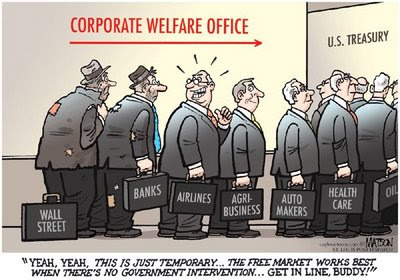 It should be readily apparent by now to anyone who even casually follows the financial news that many state and local governments are in deep, deep trouble. Layoffs of teachers, police and firefighters along with cuts in spending for state benefit programs are occurring all over the country and negating the supposed economic benefits of the recent massive increases in federal deficit spending.

One of the most basic anti-poverty programs is Temporary Aid to Dependent Families (TADF)—known colloquially as “welfare.” The program is the stepchild of the original Aid to Families with Dependent Children (ADFC), a New Deal initiative designed to combat poverty in America. There's little argument that ADFC created a culture of dependency, with multiple generations becoming welfare recipients, and did little to actually elevate the fortunes of the underclass. Thus the change over to TADF under President Clinton, which set time limits to how long families could receive welfare.

Nevertheless, since welfare payments—as the program names imply—are doled out to people with children (often single mothers), cutting off or reducing such benefits strikes right at the most vulnerable members of our society. So it was quite distressing to read this article published yesterday by the Detroit News:

Five years was the original cap on cash assistance for welfare. In some cases, extensions were available for those in need. The lawsuit says that the welfare cap violates the due process clause of the 14th amendment. They claim that the cutoff notices were vague and generic. The plaintiffs are asking a federal judge to issue a temporary restraining order against the cap.

I’m not going to take sides in this dispute either way. On the one hand the state is broke and welfare payments have never proven to be an effective means of combating poverty. On the other hand, thousands of families with children may well soon end up out on the streets. There are no easy answers here.

But what really struck me was a set of statistics that the article presented about the dismal condition of Michigan’s economy:

* 2.5 million: People in Michigan who receive one or more form of welfare benefits.

* 21,000-25,000: The number of welfare recipients in Detroit alone (Michigan's largest city) who had their cash benefits cut.

* 30,000: The number of children in Michigan who will lose welfare benefits.

* 1 out of 10: The ratio of children in Detroit and Flint whose no longer qualify for cash assistance.

* 30,000 : The number of college students who lost food stamps benefits in Michigan this year.

* 23 percent: The amount unemployment benefits will be reduced in 2012. Gov. Snyder passed legislation reducing benefits from 26 to 20 weeks for new applicants.

These are some of Michigan's largest cities. They are also the areas hardest hit by both unemployment and welfare cuts.


So…throw the “bums” off of welfare, as many conservatives and Tea Party types would no doubt advocate. Then what? It’s not like more than a handful are ever going to find a job in the worsening Michigan economy. The irony is that many of these destitute people are likley descendents of the old Southern sharecroppers who fled north in the first half of the 20th century to go to work in the automobile factories that once made Detroit and the surrounding area one of the preeminent manufacturing centers in the world.

Ignore or scoff at their plight if you will. But recognize that what you are seeing is a sobering glimpse at the eventual future for the rest of the country as well.
Posted by Bill Hicks at 6:53 AM