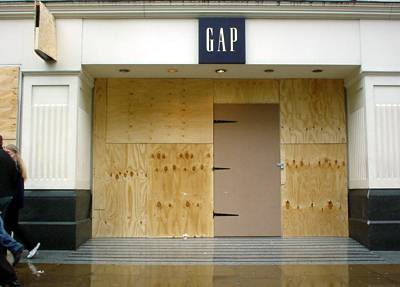 Another major U.S. retailer is downsizing in a big way, as Gap plans to close over one-third of its stores. Here is the Los Angeles Times with the details:


Gap Inc. is closing stores and downsizing others in the U.S. as it focuses on international expansion, the San Francisco company said Thursday.

The long-struggling apparel giant plans to reduce the number of Gap brand stores in North America to 700 by the end of 2013, a 34% decrease in the number of those stores when compared to the end of 2007. It didn't specify which stores would close.

The company's Old Navy brand will have roughly the same number of stores in North America, but the locations will continue to downsize in terms of square footage. By the end of fiscal year 2013, Old Navy "expects to potentially remove" another 1 million square feet.

How about that? The cheeky bastards wouldn't even say the precise NUMBER of stores they are closing. Fortunately, I took off my shoes and socks to do the math, which is how I came up with 360 stores closed from 2007-2013. Which may not be exactly right, as there was a fraction in there. Oh well...you get the idea.

So the Gap is closing stores and the Old Navy is shrinking stores. What do the corporate flacks have to say about all of that? Funny you should ask:


"In North America, sales are expected to grow modestly on its smaller, healthier specialty store fleet supplemented by sales growth in its online and outlet channels," the company said in a statement.

Once again...up is down, left is right, black is white and day is night. And closing over a third or your stores leads to a modest increase in sales. Only in America.

A different media article says it will be nearly 200 stores from current levels.
Posted by Bill Hicks at 7:12 PM