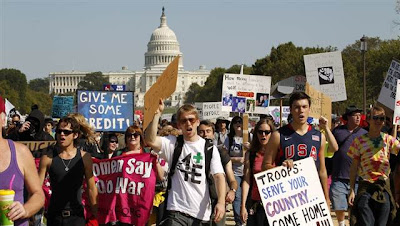 The mainstream media's coverage of the Occupy movement has been to sum it up in one word: pathetic. This was demonstrated again today with the headline above that appeared on MSNBC describing an altercation that occurred yesterday between protesters and security guards at the Smithsonian's Air and Space Museum:


Washington's National Air and Space Museum was closed Saturday afternoon after sign-wielding demonstrators tried to storm the building on the National Mall.

Yikes! Batten down the hatches, honey! The hippie barbarians are at the gates ready to rape and pillage!

So how bad was it? Judge for yourself:


At least one person was pepper sprayed when the crowd pinned a guard against a wall and another guard came to his rescue, Smithsonian spokesperson Linda St. Thomas told NBC station WRC.

"You cannot bring that stuff in the museum under any circumstances," St. Thomas told WRC.

Wow--that's quite a "storming," all right. I'm surprised anyone got out of there alive.

A video of the Smithsonian incident has since appeared on You Tube, which seems to indicate that far more than just one person was pepper sprayed by the security staff:

And this horribly slanted coverage is by the supposedly liberal MSNBC. It's like I've said before, any individual or institution owned by or that takes any money from big business or Wall Street is not to be trusted.
Posted by Bill Hicks at 11:36 AM