Memo to Michael Moore: It's the Peak Oil, Stupid 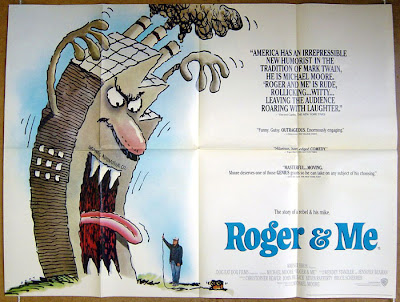 Okay, I'll admit, that headline is a little harsh. I actually LIKE Michael Moore. His first and best documentary, Roger and Me, demonstrated way back in 1989 how the effects of globalization were already devastating the working class. Call him a blowhard if you will, but his expressions of pain and outrage at the slow motion economic catastrophe that was engulfing his hometown of Flint, Michigan, were sincere. Hailing as I do from a similarly devastated rust belt burg, I completely identified with that movie.

I also like Moore because he's a rabble-rouser. And whether you agree with everything he says and does or not, you have to admit that America would be a lot better off if we had more of his ilk...not afraid to speak his mind at the pompous ass freak show that is the Acadamy Award telecast, for example. Not surprisingly given his history, Moore has thrown his (ahem) weight behind the Occupy protests, and I applaud him for doing so.

Last Tuesday night, however, he was interviewed by MSNBC about the protests, and made this observation:


Liberal filmmaker Michael Moore said Tuesday night that the “Occupy Wall Street” demonstration in lower Manhattan and other cities continued to grow because Wall Street had ruined the lives of so many people in the middle class.

“I think historians when they look at this time, they’re going to wonder why the wealthy overplayed their hand like this,” he said during an appearance on MSNBC’s PoliticsNation.

“Why would they, when they had it so good? They had the middle class voting for the politicians that the wealthy bought, everything was running just fine, they were posting profits of a billion a year, but that wasn’t enough for them.”

“What they did was started to ruin the lives of the very people who voted for their politicians and supported them all these years, the middle class,” Moore said.

Ummm...Bill, I hear you asking. I thought you SUPPORTED the Occupy movement. If so, then what the heck is wrong with THAT?

Those words certainly SOUND good...except for the fact that they demonstrate that Moore possesses the same massive blind spot of nearly every prominent American these days, regardless of political ideology. Really, Michael? Is it THAT difficult to understand why the wealthy "overplayed their hand," as you put it?

Okay, let my try and keep this simple. Think of the economy as a gigantic pie in which every non-incarcerated citizen gets a slice every year. The wealthy get the biggest slices and the poor get smallest. Moreover, in a hierarchical society like ours, the wealthy always ensure that they get their slices first before the rest is doled out to the "99%" if you will. When the economy grows, the pie gets larger and everybody's slice gets bigger, minus the amount of the additional slices given over for population growth.

It all works great as long as the economy keeps growing. But what happens when our society begins to bump up against natural resource limits and real economic growth is no longer possible? Well...the wealthy, who control the politicos who hold the large cutting knife, ensure that they continue to get their slices even though the pie remains the same size or actually begins to shrink. Obviously, that means that there is less pie left for everyone else. Just as obviously, those young adults who have newly graduated into the system and are at the very end of the line suddenly find that there is no pie left for them.

Unfortunately, Michael, as long as you remain blind to these basic facts, you are going to continue to mislead your fanbase into thinking that this is a political problem rather than a resource problem. The kids out there chanting the slogans and waving the signs are never going to be able to live the same consumerist lifestyle that their parents did. In that they are no different than the sons and daughters of those blue collar factory workers whose ruined lives you portrayed so effectively a generation ago in Roger and Me. Rail against the wealthy if you will, but don't ever think that even if somehow a miracle were to occur and they were to agree to give up a substantial portion of their share of the pie it would solve all of our economic problems.
Posted by Bill Hicks at 6:48 AM