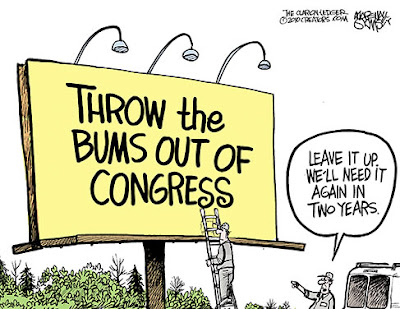 In yesterday’s post, I took a swipe at South Carolina Republican Governor Nikki Haley for her idiotic directive instructing state employees to proclaim “It’s a Great Day in South Carolina” whenever they answer the phone. Well, they must slipping something into the water at the Governor’s Mansions down in the Carolinas, because North Carolina’s Democratic Governor also found herself in some hot water this week. Here’s the story as reported by the Fayetteville Observer:


Gov. Bev Perdue garnered unwelcome national attention this week after she said the country might benefit if the 2012 congressional elections were suspended for two years.

She later called her comments made at a Rotary Club in Cary a sarcastic way of saying that Congress should focus on the nation's problems instead of political campaigns.

But Republicans and critics have pounced, including radio talk show host Rush Limbaugh. He called her "dumb, stupid, bumbling and foolish" on Wednesday.

Other Republicans locally and nationally have piled on as Perdue's fellow Democrats cringed.

Her presumed 2012 Republican gubernatorial opponent, Pat McCrory, put out news releases slamming Perdue's "bizarre commentary" that the country needs to ignore the Constitution. McCrory accused Perdue of using her staff "to cover up her blatant mistake by saying she was just joking," when a reporter asked for an explanation.

The brouhaha started Tuesday when an audience member at a Cary Rotary Club meeting asked Perdue how she could improve the state's economy, The News & Observer reported.

Perdue's answer, in part, said, "You have to have more ability from Congress, I think, to work together and to get over the partisan bickering and to focus on fixing things. I think we ought to suspend, perhaps, elections for Congress for two years and just tell them we won't hold it against them, whatever decisions they make, just let them help this country recover. I really hope that someone can agree with me on that."

She eventually answered the man's question by saying she is trying to turn the state around.

Okay, I’m going to go a little easier Governor Perdue than the Republicans have, because when you review the full context of her remarks you realize that this whole “controversy” is much ado about nothing. Governor Perdue was merely inartfully expressing the frustration felt by many people about the partisan warfare and gridlock in Washington as the Great Recession grinds on. She wasn’t trying to “subvert the constitution” as her dimwitted opponent claims. The fact is, as a state governor she has precisely ZERO say on when national Congressional elections are held. It could also be said in her defense that suspending the elections would lock the House Republican majority into place for two additional years, so you can’t really even accuse her of being partisan in her remarks.

No, the reason I am going to slam Governor Perdue is for espousing the ridiculous notion that giving the current set of clowns in Congress two more years to dither would matter one bit. The real issue causing the current political standoff is that U.S. has entered a period of permanent peak oil-induced economic contraction, which means that there will soon be less of all government benefits—from defense contracts, to corporate subsidies, to welfare payments to Social Security and Medicare—to go around. None of the countless constituencies that lobby for and depend upon federal largess wants to see their slice of the pie cut, nor their own taxes raised. It really is just that simple.

Those who are still delusional enough to look for solutions from the political system—of whom there are many—are setting themselves up for (yet another) massive disappointment. The only reason there has not already been deep cuts to government spending across the board is because the government has been able to borrow over $14.5 trillion (to date) from the future that will never be paid back. For each of the past three years, the federal government has run annual deficits approaching $1.4 trillion—ten percent of America’s GDP—just to keep government beneficiaries across the board from feeling the real pain of the country’s financial mess. How much longer the feds can continue to do this is anyone’s guess.

So you see, Governor Perdue, you could go ahead and propose that Congressional elections be cancelled for the next 100 years if you would like, and give the current set of jackals in Congress a Supreme Court-like LIFETIME hold on their positions. It still wouldn’t change anything. But I know…you’re a politician. You can’t possibly get caught telling people the truth. So you just keep on trying to “turn your state around” without having any clue as to what the baseline problem even is. I’m sure your constituents will appreciate you for it.
Posted by Bill Hicks at 9:22 AM