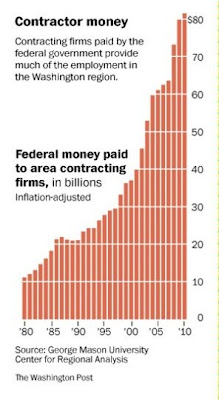 Last week, in my post, “Corporate Welfare for Dummies: the Federal Government Overpays Private Companies for Contract Employees,” I wrote about how even in this supposed age of “austerity,” the federal government continues to shell out big money to private contractors (known as "Beltway Bandits") who would not be in business were it not for all that federal largess. Yesterday, a friend sent me a Washington Post article from last month that drives home the point even more dramatically:


Millions of dollars worth of federal contracts transformed Anita Talwar from a government accounting clerk into a wealthy woman — one who can afford a $2.8 million home in the Washington suburbs with its own elevator, wine cellar and Swarovski crystal chandeliers.

Talwar, a 59-year-old immigrant from India, had no idea that she and her husband would amass a small fortune when she launched a company providing tech support to the federal government in 1987. But she shrewdly took advantage of programs for minority-owned small businesses and rode a boom in federal contracting.

By the time Talwar sold Advanced Management Technology in 2004, it had grown from a one-woman shop to a company with more than 350 employees and $100 million in annual revenue — all of it from government contracts.

Talwar’s success — and that of hundreds of other contractors like her — is a key factor driving the explosion of the region’s wealth over the last two decades. It also has exacerbated the gap between high- and low-wage workers, which is wider in the D.C. area than almost anywhere else in the United States.

Washingtonians now enjoy the highest median household income of any metropolitan area in the country, and five of the top 10 jurisdictions in America — Loudoun, Howard and Fairfax counties, and Falls Church and Fairfax City — are here, census data shows.

The signs of that wealth are on display all over, from the string of luxury boutiques such as Gucci and Tory Burch opening at Tysons Galleria to the $15 cocktails served over artisanal ice at the W Hotel in the District to the ever-larger houses rising off River Road in Potomac.

But nowhere is the region’s wealth more concentrated than the place where Talwar purchased her 15,000-square-foot white-brick estate home: Great Falls, a once-rural enclave of about 15,000 residents 17 miles west of the White House.

Talwar’s neighbors are entrepreneurs, lobbyists, CEOs, tech moguls, financiers and defense contractors for whom two wars have been very, very good business. Their portfolios take hits when the stock market plummets, as it did this month, but the setbacks are usually temporary.

While others have struggled to recover from the recession, many of the residents of Great Falls have continued to launch new business ventures, enjoy easy access to venture capital and reap the benefits of bonuses and deferred compensation plans. Median household income there has increased 32 percent in the last 10 years, helping to widen the divide between those at the top and bottom of the economic ladder to a record high in Virginia.


The whole article is quite lengthy and well worth reading in its entirety. I also encourage you to take a look at the accompanying slideshow of pictures showing the luxurious living conditions in and around Great Falls. I live about ten miles from there and have driven through that area many times, so I can attest to the accuracy of the article’s description of it as a swanky enclave. In fact, I always used to wonder exactly who was making the kind of dough that allowed them the conspicuous wealth on display there. Well, now I know.

If you want to know why our so-called “leaders” are having so much trouble wrestling with reducing the federal budget deficit, this is a big part of the answer. These are the people who live in the same neighborhoods as our Congressmen and Senators. Their kids go to the same elite private schools, they all play golf at the same ritzy country clubs and they network over $200 bottles of wine and hors’doeuvers at the same fashionable parties. The chart above also tells you all you need to know about why the DC-area economy continues to boom while much of the rest of the country remains mired in recession.

It should go without saying that any system that enables people who do government work to purchase multimillion dollar homes and live a lifestyle of the rich and famous at a time when so many Americans are out of work and destitute is fundamentally broken. Sadly, it is exactly the sort of thing you would expect to see in a third world banana republic. So far, public anger in the U.S. has mostly been directed on the left at Wall Street and the big banks, or on the right at beneficiaries of government entitlement spending. The Beltway Bandits have largely avoided public scrutiny, except for occasional notorious incidents like when some Blackwater operatives shot innocent civilians in Iraq.

I also find Ms. Talwar’s story to be interesting. Back on May 17th, I wrote a post entitled, “Whatever Your Ancestry, Being an American Means the Freedom to Consume as Much of the Planet's Resources as Possible,” in which I asserted that the delusional American Dream of having the big house, the big cars and all of the luxuries in life in a resource limited world is what really draws people to the United States rather than any naive notion of this supposedly being the land of the free. Clearly, Ms. Talwar is living that dream, even if it was underwritten by the U.S. taxpayers.

Remember this story next month when the deficit reduction commission delivers its recommendations and the next big round of budget battles begins in Congress. An obvious starting point for reducing government spending would be to greatly reduce government contracting. But I’m willing to bet you right now that it is not going to happen any time soon.
Posted by Bill Hicks at 6:50 AM