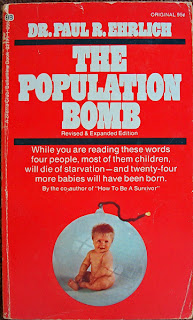 Disproving once and for all the notion that statisticians do not have a sense of humor, today is not only Halloween but the day, according to the leading entities charged with tracking human population growth, that our collective numbers will exceed the seven billion mark. My preferred source for keeping track of world population is Worldometers.info, which has been morbidly counting down to this momentous event for several weeks now. It looks like the clock will strike seven billion at precisely 1:48 P.M. EDT this afternoon.

To put what this means in perspective, here's a quote from an article written by Paul B. Farrell that appeared on the website MarketWatch back on June 28th:


Yes, you can forget “Peak Oil.” Forget global warming. Forget debt, deficits, defaults. Forget commodities, scarce resource depletion. Forget all other economic, political, military problems. Yes, forget all of them. None of them matter … if our leaders fail to deal with the world’s out-of-control population bomb. Nothing else matters. Nothing.

Still, the silence is defining. We’re trapped in this deafening “conspiracy of silence.” Neutered. Blind to this suicidal path, incapable and unwilling to face the greatest single economic challenge in history. Won’t wake up till it’s too late.

Why? Deep in our hearts we see no acceptable universal solution. So we wait … until this economic bomb stops tick-tick-ticking. Explodes in our faces. Till the wake-up call, a total economic collapse. Till then, the silence is deafening. We stay in denial. Waiting.

If you want to know why I am such an extreme pessimist you need look no further than the blurb above. Yes, optimists have been making fun of Thomas Malthus for more than two centuries, and have been deriding author Paul Ehrlich of Population Bomb fame for a couple of generations now. But the thing to keep in mind is that Malthus and Ehrlich need only be proven right once, whereas their critics have to keep being right forever and ever lest their criticism blow up in their faces as the bomb finally detonates.

The key question is how long do we have until the bomb does finally explode? No one can say for sure, obviously, and if I didn't think it was imminent--say within the next 20 years or so--I'd probably be off somewhere sipping a beer and a watching football game rather than sitting here writing for this blog.


Bonus: since this song came out around the same time as The Population Bomb was published, I always thought it would be the perfect theme for the title sequence were they ever to make the book into a feature film.