But Wait it Gets Worse...The Federal Government's Pension Plan is Underfunded by a Staggering $5.7 TRILLION 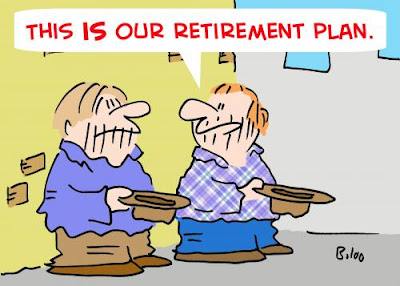 Earlier today I posted about how the Pension Benefit Guarantee Corporation, which insures private pension plans in case of corporate insolvency, is itself deep in the red, putting anyone with a private pension at risk of losing it. Not to be outdone, Congress decided to set things up so federal employees are hosed EVEN WORSE. Here is Governing.com with the details:


Far less attention has been paid to the Federal Employee Retirement System. Despite providing benefits to a fraction of the number of people that Social Security covers, one analysis estimates that FERS faces a staggering $5.7 trillion in unfunded liability.

The reason for the huge shortfall is a classic case of "do as I say, not as I do." Private employers that provide pensions for their employees are required to put money into retirement funds. But unlike the payroll tax that helps fund Social Security benefits and the pension funds out of which payments to state retirees are made, the federal government sets nothing aside, paying its retirement costs from tax revenue and borrowing.

The root of the problem dates back to 1986, when FERS was created to take the place of the old Civil Service Retirement System. Federal employees hired prior to 1984 remained in the old system, while those who started in 1984 or later are in the new one.

So if it's any consolation, whether your pension is public or private you are just as fucked. What a country.
Posted by Bill Hicks at 12:46 PM