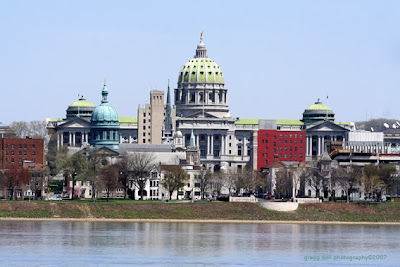 The capital city of the Keystone State has been flirting with municipal bankruptcy for so long that it actually came as a surprise Tuesday night when the city council finally took the long overdue step of actually doing it. Here is the Pittsburgh Post-Gazette with the details:


The financial mess engulfing the capital city has become even more complex, as City Council decided last night to hire a Philadelphia lawyer to file for municipal bankruptcy protection from its creditors.

The filing, approved by four of the seven council members, comes as the Senate is set to vote next week on a bill to permit a state takeover of city finances, which are several hundred million dollars in the red.

So what happens if the state tries to take over the city’s finances? This:

State Sen. Jeffrey Piccola, R-Dauphin, and Rep. Glen Grell, R-Cumberland, have a bill to allow the state secretary of community and economic development to come up with a financial plan for the city within 30 days. If that wasn't adopted by city officials, Gov. Tom Corbett would name a "receiver" who would make all key decisions on city finances, rather than the council and mayor.

Mr. Corbett has said he would sign such a bill, but attorney Schwartz says it's unconstitutional for the state to take over city finances and may go to court to stop it.

Just to refresh everyone’ memory, here is Wikipedia on how Harrisburg got to this point:


In 2009, the financial crisis and resulting recession took their toll on Harrisburg's municipal finances. Harrisburg was not able to budget for $68m in debt payments due to a local $288m incinerator project. On September 1, 2010, the city announced its intention to skip a debt payment of $3.29m on the incinerator project and Daniel C. Miller, the City Controller, has suggested possible trouble with the City's General Obligation bonds. Chapter 9 municipal bankruptcy may well be in Harrisburg's future. Harrisburg moved one step closer to Ch. 9 on Nov 10, 2010 after they accepted an offer from New York bankruptcy attorney Cravath, Swaine and Moore for free bankruptcy advisory service.

For the September 2011 annual bond interest payment of US$3.3m on the incinerator, the city was forced to mortgage some of its carparks at 10% interest to obtain finance to make the payments. The state of Pennsylvania will not permit Harrisburg to declare bankruptcy, and may instead take over the city.

Let’s be very clear about this: the only reason the state would move to take over Harrisburg’s finances is to try to protect the financial institutions that are holding the city’s bonds from taking a haircut in bankruptcy proceedings. Better that Harrisburg be forced to sell off all of its assets and gut city services than the financial predators who loaded the city up with debt being forced to take any losses. If a court case does ensue, then you have the spectacle of the taxpayers of Pennsylvania essentially suing themselves—thus paying attorney’s fees on both sides--just to protect the interests of the banks.

Of course, what’s at stake here goes far beyond just Harrisburg. There are likely hundreds, if not thousands of state and municipal governments around the country whose finances are stretched to the breaking point and that will eventually have to concede to the inevitable. The large financial institutions holding those municipal bonds are going to be pulling out all of the stops to convince the politicos to force the cities, counties and states to "take responsibility" and repay those obligations, instead of being rightly forced to take the losses from having made those bad bets to begin with.
Posted by Bill Hicks at 6:46 AM