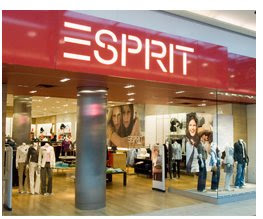 You would probably never guess this from reading my posts, but I'm not exactly what you would call a fashionable guy. I look pretty good in a suit, but I prefer the basics: black or grey, white shirt, red power tie, black shoes and belt. And I'll get by with a couple of those. No need blow my whole paycheck filling the closet with them.

I guess what I'm saying is that I've never understood people who feel compelled to overspend on clothes. The mark up on designer brands in particular is insane, and the kind of person who feels they need to impress people by overpaying for just the name is the type of superficial individual I wouldn't care to get to know anyway. Which is all a long winded introduction to this story that appeared today:


With its business in North America losing money despite continued efforts and investment, Hong Kong-based Esprit had decided to divest its business.

I dimly remember walking past an Esprit location at the mall somewhere at some point. It was one of those places that I didn't even need to cross the threshold to know it offered nothing I would be interested in. Oh well, looks like more vacant retail space is about to open up around the country.
Posted by Bill Hicks at 10:53 AM