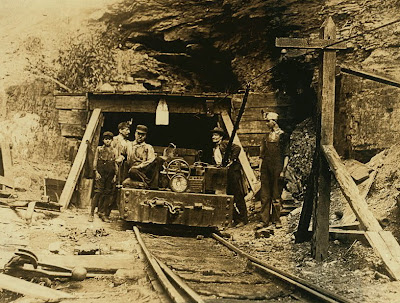 image: West Virginia coal mine, circa 1908


For much of the past decade, coal has been touted by industry flacks and in the media as being the answer to America's future energy needs. Among the notions tossed about during these discussions is the laughable Orwellian concept of "green coal" as well as the idea that we have "a couple of centuries" worth of the stuff still in the ground.

Well, somone might want to review that second talking point, because as pointed out in a recent article that appeared in the Huffington Post, production in America's oldest coal region is dropping fast:


When business screeched to a halt at Jerry Howard's eastern Kentucky mine engineering company two years ago, he decided to call it quits after four decades in the coal industry.

"We were sort of forced out," Howard says of the former company, Walturn, where he was part owner.

Business owners like Howard, politicians and miners in the hilly coalfields of Central Appalachia blame the industry decline on tougher regulation from the Obama administration. They aren't as ready to talk about something a change in administrations cannot fix. The region's thick, easy-to-reach seams of coal are running out, forcing many operators to shift to cheaper and more destructive mining methods that draw heavier environmental regulation.

Coal here is getting harder and costlier to dig – and the region, which includes southern West Virginia, Virginia and Tennessee, is headed for a huge collapse in coal production.

The U.S. Department of Energy projects that in a little more than three years, the amount of coal mined here will be just half of what it was in 2008. That's a significant loss of a signature Appalachian industry, and the jobs that come with it.

"The seams of coal that are left in this area are harder and harder to mine, and they're thinner and thinner and thinner," said Leonard Fleming, a retired Kentucky miner and union leader in Letcher County who worked in the industry for 32 years.

Wow...a 50% crash in production in just seven years sure sounds like Appalachia has hit Peak Coal, all right. As we peakists say about oil, the peak comes when most of the easy to obtain and cheap to produce stuff is all gone, leaving the more expensive and difficult to extract portion behind. And that is clearly what is going on here, or as it was summed up at the end of the article:


Justice said when he was just getting into the business, an old veteran of the mines gave him some words to live by.

"He said, `The number one rule in mining is you mine the best and then what's left is the best,'" Justice said. "They've been mining coal here in the valley for about 100 years. And the first day the first guy mined the best lump of coal he could find – that was the easiest to get."