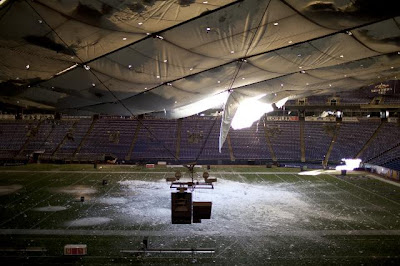 Image: the Metrodome in Minneapolis, Minnesota does its bet impression of the American economy.

In this era of budget austerity and diminishing public services, you would think the last thing state and local governments would be doing is to continue subsidizing billionaire sports team owners by handing them hundreds of millions of taxpayer dollars for new stadiums. Why silly you, did you just fall off the turnip truck or something? This is America: Land of the Free and the Home of the Publically Funded Corporate Sky Box that the general public will NEVER get to set foot in.

The latest trick to ensure that those taxpayer dollars continue to flow is keep the voters—who might wonder at the skewed priorities of such subsidies at a time when teachers, policemen and firefighters are being laid off— from even having a say in the matter. Here is the Minneapolis Star Tribune with the story:


The proposed Minnesota Vikings stadium tax won't face a public vote in Ramsey County, but a report to be released Wednesday by the Metropolitan Council raised new questions about the viability of the Arden Hills site.

The report says the price tag and time line for clean-up of the site -- a former munitions plant -- will be greater than expected and that a county sales tax plan to help finance it would "compromise the county's and the region's ability to finance other projects."

Vikings spokesman Lester Bagley said he was pleased that the Ramsey County Charter Commission decided against putting the sales tax to a public vote but said the Vikings were "surprised" that the report had been made public before Wednesday's formal release.

I’ll bet the public relations flack for the Vikings is just pleased as punch that the people whose money is going to be given to his fat cat bosses are not going to have any say in the matter. That’s American democracy inaction for you.

So, how much are we talking about here:

Wow, that’s quite a chunk of change. All to build a brand spanking new stadium so two groups of overpaid millionaires can spend three hours on Sunday banging into each other a grand total of EIGHT TIMES PER YEAR. Seems to me that a better use of this money would be...oh I dunno...damn near anything.

It’s funny how often you hear conservative commentators bashing public employee unions for their “gold plated” health care plans and retirement benefits that come at public expense, and yet they never seem to utter a peep about billionaire subsidies like sports stadium funding. Look, it sucks for the Vikings that they have to play in a stadium with a roof that is susceptible to collapse every time a snowflake lands on it, but once and for all if they want to build themselves a new place of business LET THEM PAY FOR IT, just like any small business owner would have to do.

At least one guy gets it. Here’s a quote from near the end of the story of what he said to the panel that made this hideous decision:


"By not allowing a vote, you are preferring to serve special interests and not the people you were appointed to serve," said John Waldorf of North St. Paul.

Welcome to America, Mr. Waldorf. Are you ready for some football?
Posted by Bill Hicks at 6:20 AM