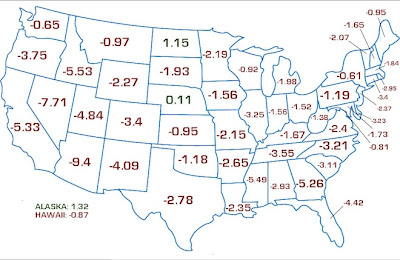 In this morning's post, I reported an anecdote about my friend Leslie, who among other things has bemoaned that her dire financial situation is going to delay her being able to start a family. Well, as reported today by Talking Points Memo, here come the statistics indicating that she is not alone:


A new Pew report details a sharp decline in fertility rates across the United States that appears closely tied to the economic recession that hit the country in approximately 2007.

The correlation between a faltering economy and the national birth rate is nothing new. What is astounding, however, is that the birth rate for almost every state has dropped dramatically. In 2007, the country experienced a record number of births, 4,316,233. Since then, following one of the worst recessions the U.S. has ever seen, Pew's provisional data shows that the number of births in 2010 was just 4,007,000.

Note that the biggest declines have occurred in some of the states that have been hit hardest economically during the Great Recession, such as California, Arizona, Nevada and Florida. Another thing to keep in mind about this is that all of our social welfare programs, particularly Social Security, are designed based upon an assumption of continued population growth. Should it continue long term, this trend spells financial disaster.

I guess we're going to have to start referring to: Peak Americans.
Posted by Bill Hicks at 3:00 PM