Yet Another City is Turning Off Its Streetlights to Save Money 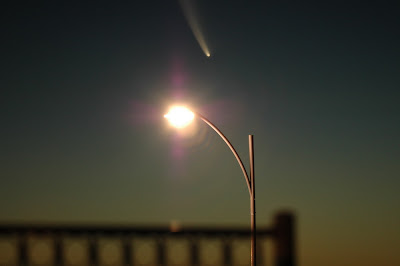 In the latest of a recurring theme of stories over the past few years, the Detroit suburb of Highland Park recently announced that is was shutting off over half of its streetlights due to unpaid electricity bills. Here's the Detroit Free Press with the story:


DTE Energy has finished removing more than half of Highland Park's street lights in a city-approved plan to pay off $4 million in unpaid lighting bills.

DTE Energy spokesman Scott Simons said today that the company removed 1400 light poles and put in 200 poles, replacing them with improved technology at intersections. DTE workers completed the project in late September, he said. There are now 500 streetlights left in the city, Simons said.

Mayor Hubert Yopp said today that he looked at crime statistics and felt the move was the best option for the city.

"We’re trying to keep (costs) down so the taxpayers don’t have to pay extra money," Yopp said. He said city council approved the plan earlier this year.

Highland Park has been unable to pay a bill in full for at least five years, sending only partial payment on $60,000-per-month streetlight fees, Simons said. DTE and city officials agreed on the current plan in May, which will reduce costs to about $15,000 per month, Simons said.

Streetlights are such a commonplace feature of our modern infrastructure that you don't even think about them. Until they get turned off, that is. Taken in isolation, this is just one little story about one struggling community tightening its belt in the age of austerity. But taking the larger, long term view, there is no doubt that, as the picture above shows, it's a sign of things to come for the rest of the country.
Posted by Bill Hicks at 6:14 PM