Greece is "Saved" - All is Well 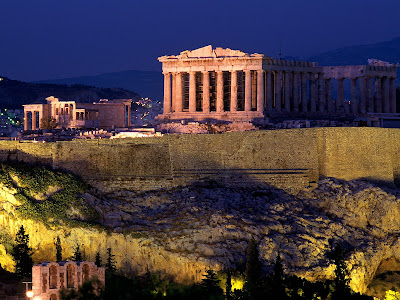 Seriously, that's what they want you to believe. I wrote about this very issue back on July 14th, in my post: "Why We’re Screwed (Part 4): The Propaganda Ministry Touts the Dow Jones Industrial Average." Here's what I said then:


There is perhaps no more observable example of the Hologram in action than the relentless touting of the stock market indices, the Dow Jones Industrial Average (DJIA) in particular. Every cable “news” channel features a stock ticker that provides updates in real time all day long. The evening news shows, despite only having about 21 minutes per half hour broadcast to sum up the day’s events, always makes sure the stock results get highlighted—even on that bane of right wing conservatives everywhere, National Public Radio. It’s been this way for so long that no one ever questions why that should be.

Why promote the DJIA so relentlessly when it’s the upper 10% of households that own a majority of stocks while the lower half of wage earners own virtually no stocks at all? The networks insist on persistently pumping a figure of little meaning to a vast majority of the population. What’s more, most of those who do have large stock portfolios presumably get their financial information from sources far more sophisticated than the nightly news. And if they don’t, they shouldn’t be investing in stocks in the first place.

The only answer I can come up with is that the DJIA is being used a propaganda device to help sell the narrative that all is fine with the economy. Since the depths of the market crash in March 2009, the DJIA has regained nearly all of its pre-crash losses.

Yes, stocks are way up. Whoo-hoo, happy days are here again. Pop the cork on the champagne, honey, tonight we are going to celebrate.

Don’t pay any attention to the fact that the rally was bought and paid for by the Federal Reserve’s Zero Interest Rate Policy and Quantitative Easing programs; the federal government’s $700 billion bailout of the big banks and Wall Street; and an additional trillion dollars of annual deficit spending being added over and above the already high deficit levels of President Bush’s last full year in office. Also ignore the fact that even with the recent run-up, stocks are not much above where they were in 2000, meaning you could have kept your money under your mattress for the last 11 years and been just as well off—not to mention that you probably would have slept better during the market’s many wild gyrations.

The very purpose of all the reckless post-crash economic policies was primarily to pump up the stock markets. In the minds of our economic overlords, it was imperative that at least the facade of prosperity be propped back up in order to quickly dissipate the doom and gloom mentality that accompanied the financial crash. Consumer spending represents approximately 70% of the American economy, so they had to get the plebes to open their wallets and pull out the plastic again. Coaxing folks back into the shopping malls required getting them to stop worrying about the future and to resume partying like there’s no tomorrow.

Since I wrote that post, those in charge have developed another reason to drive the markets back up, namely the rise of the Occupy Wall Street protests. A stock market crash now would go a long way towards legitimizing the protesters in the eyes of your average American couch potato.

So if you still have your money in stocks, enjoy this ride, because it likely won't be too long before the roller coaster makes its next dip.
Posted by Bill Hicks at 1:19 PM