Pension Underfunding Increases Another $134 Billion, but the Media Misses the Big Picture 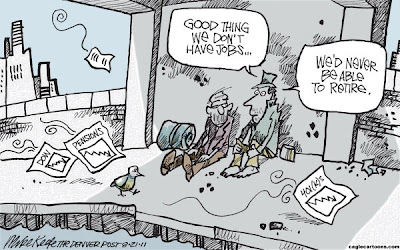 Back on August 10th, I wrote a post entitled, "Company Pension Underfunding Jumps 38% to $351 Billion as Economy Slows," which included this passage:


The gap between the assets of the 100 largest company pensions and their projected liabilities has widened by $97 billion in August to $351 billion, actuarial and consulting firm Milliman Inc. said today in a statement.

Well, Mister, we could use a man like Herbert Hoover again, because Those Were the Days, as reported on Thursday by CNBC:


How bad is the cash crunch for companies? The aggregate deficit of pension plans among S&P 1500 companies climbed by $134 billion in September to $512 billion, according to Mercer. The funded status of the 100 largest corporate pensions dropped by $124 billion during September, according to Milliman, an actuarial and accounting firm. Looking at it another way, the funded ratio of companies in the index slipped to less than 73 percent from almost 80 percent at the end of August.

The situation is deteriorating rapidly: The decline in the last quarter was the most significant three-month drop since the start of the financial crisis at the end of 2008, Milliman said.

Even more worrisome, pension obligations are expected to grow because companies must meet funding requirements set out in the Pension Protection Act of 2006. "You're talking about dramatically increasing funding obligations in just a year's time," said Lynn Dudley, senior vice president policy of American Benefits Council, a Washington, D.C. trade association. "What businesses do is halt projects, and they halt hiring to save the money because it's not a choice. They're going to have to put it into the plan."

But wait, take a deep breath and say "calm blue ocean" a few times, because your government has everything well in hand, as reported in the same article:


Employees "are going to get their pensions, but they may lose some flexibility in terms of the pension payments they receive," Dulaney added. "They don't want to give notice to workers about the restrictions," he says. "It might cause panic among participants."

But they shouldn't, said Davis of the Pension Rights Center. Even in the worst-case scenario such as when a company files for bankruptcy, workers receive most if not all of their benefits from the Pension Benefit Guaranty (Corporation), which insures private pensions and pays benefits when companies can't.

Ah yes, the good ol' PBGC is going to come riding to the rescue. You can go ahead and put away the inhaler. Hey, I hear there are some GREAT college football matchups on the boob tube today.

Except...wait a minute...I think I'm forgetting something. Oh yeah, sorry to bring this up, but there was that little matter of the post I wrote back on August 10th entitled, "Harry & David Gets Court Permission to Terminate 2,700 Employee Pensions," which included this little nugget courtesy of Wikipedia:

So, to sum up, the same federal agency that is going to "save" your pension is itself already broke at a time when large company pensions are underfunded by over half-a-trillion dollars.

Okay, you can start panicking now. If you have a pension that is.
Posted by Bill Hicks at 6:23 AM