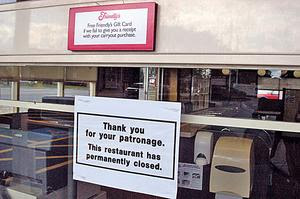 First it was Harry & David that dumped its pension obligations onto the federal government during bankruptcy proceedings, and now Friendly's is trying to do the same thing, according to this report from the Boston Globe:


A federal agency that monitors company pension plans is accusing Friendly Ice Cream Corp.of filing for bankruptcy protection in order to get out of paying the pensions of nearly 6,000 workers and retirees.

Friendly’s, the Wilbraham chain that is owned by private equity firm Sun Capital Partners Inc., filed for bankruptcy protection last week under Chapter 11 and abruptly shuttered 63 stores and laid off about 1,200 workers. The company said it was a casualty of a difficult economy, high supply costs, and changing customer tastes.

But the Pension Benefit Guaranty Corporation, a federal agency responsible for protecting workers’ pension benefits, yesterday said the real reason for Sun Capital’s bankruptcy filing was to use the reorganization process to abandon the pension plan, while retaining ownership of Friendly’s.

“It looks like Friendly’s and Sun Capital are trying to make their employees and retirees bear the brunt of the company’s restructuring; the employees deserve better,” said Josh Gotbaum, director of the Pension Benefit Guaranty Corporation.

Friendly’s, which was founded during the height of the Great Depression, outlined its intentions in a workout plan it filed in bankruptcy court. Under this proposal, nearly all of Friendly’s assets would be sold to an affiliate of Sun Capital, which would not assume the company’s liabilities, including the pension plan. The pension liabilities would remain with the old Friendly’s, which would be left with few or no assets.

Just a reminder, as I pointed out again on Saturday, the PBGC is already running in the red:

So if Friendly's gets away with it, the U.S. taxpayer will be stuck with the bill, the national debt will increase, and the ultimate day of financial reckoning for the federal government will draw that much closer. God bless the U.S.A.
Posted by Bill Hicks at 7:29 PM