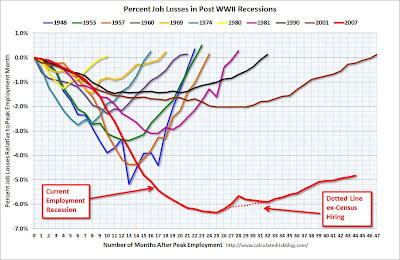 The Monthly Jobs Report from the Bureau of Labor Statistics (BLS) came in with a huge surprise on the upside today, topping 100,000 jobs added with even last month’s shocking zero figure revised upward to 57,000. The figure for July was revised upwards as well. Now, I’ve been on record as saying that I don’t trust the BLS numbers, particularly the manipulated “Birth-Death Model” that usually adds phantom jobs to the overall figure. But even so there is no denying that, so far, the recent bout of market volatility has not resulted in massive net job losses the way it did in late 2008 and early 2009.

This week actually saw another remarkable market turnaround. On Tuesday afternoon, just as it looked like the Dow was about to crash again below the psychologically important 10,000 level, there was a sudden rally that carried it back over 11,000 for the weekly close. Even if you take the employment report at face value, however, the number of jobs created was still below the roughly 150,000 or so needed just to keep up with population growth. Additionally, I’m willing to bet that very few of these new jobs are the kind with good pay and benefits that would allow someone to buy a house, raise a family and plan for their retirement. As you can see by the chart above from Calculated Risk, we are still a LONG way from merely returning to the number of jobs we had at the start of the Great Recession, and my bet is that we will NEVER get back to that level.

People who are peak oil aware or call themselves “doomers” usually identify themselves as being believers in either a “fast crash” or a “slow crash.” I am on record as being in the slow crash camp, mostly because it has been repeatedly demonstrated that the powers that be will literally throw everything including the kitchen sink into preventing things from falling apart overnight. The closest we’ve come to the fast crash playing out was in September 2008 in the wake of the Lehman Brothers collapse. That event was the wake up call to those in charge that they needed to take out all the stops to prevent catastrophe, and every move they have made since then indicates that they know at least at a subliminal level what the alternative is. In their minds, it is better to continually borrow against a future that is never going to come rather than risk losing everything they have were they to openly acknowledge the predicament faced by our civilization.

So how much longer can they continue to “kick the can down the road” and play their financial shell games to hide the truth? As I’ve said before, that is anyone’s guess. Personally, I do think the status quo will end with a bang at some point. I just think that the bang is still a ways down the road yet.
Posted by Bill Hicks at 6:56 PM