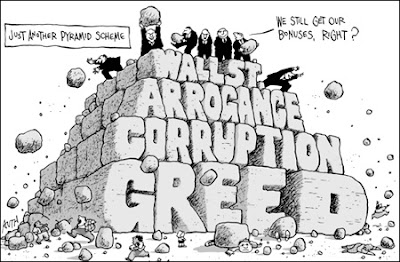 TruthDig.com columnist Robert Scheer is a long-time liberal icon. A rabble-rouser since the 1960s, Scheer was infamously dropped by the Los Angeles Times back in 2005 after he wrote a column blasting the Bush Administration for its role in allowing 9/11 to happen. Like many liberals, however, Scheer often falls into the trap of arguing that change can be effected through the political system rather than acknowledging that it is the system itself that is corrupt.

But perhaps that is changing. In his most recent column, entitled “The Men We Trusted to Lead Us,” Scheer soberly points out that the financial crisis was very much a bipartisan fiasco. Calling out the roles that former Republican Senator Phil Gramm and former Clinton Treasury Secretary Robert Rubin played in enacting the repeal of Great Depression era banking regulations, Scheer concludes:


Gramm and Rubin’s “just free Wall Street to do its thing” ideology still dominates the economic policies of both major political parties. Rubin’s acolytes have controlled the Obama administration’s economic strategy of saving Wall Street by betraying Main Street, and Gramm, who recently endorsed his former student at Texas A&M, Rick Perry, for president, remains the free-market-mayhem guru for Republicans. On Election Day, whoever wins, we lose.


Wow…that last sentence sounds like exactly like the kind of thing I write on this blog every single day. Scheer is absolutely right. There is no hope to be derived that the political process will result in “change we can believe in” or in fact any change whatsoever.

This is why the Occupy Wall Street protesters and their fellow travelers around the country need to scrupulously avoid having their movement co-opted by the political process...the Democratic Party in particular. That is exactly what happened in Wisconsin earlier this year when all of the vibrant energy of the protests against Governor Scott Walker's union busting efforts got channeled into a batch of utterly pointless recall elections. The protesters should listen to Robert Scheer, and never, EVER, place their trust in or give their support to ANYONE, including especially President Hopey-Changey, who takes as much as ONE DIME in Wall Street campaign cash.