The Climate, it is a-Changing 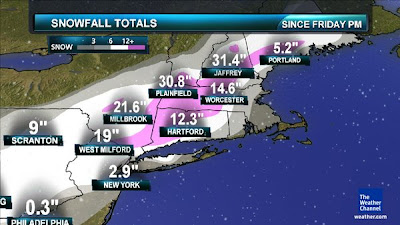 Yes, yes, yes, I know you're not supposed to attribute individual weather events to climate change. So noted. And if this weekend's unprecedented October snowstorm that struck the Northeast was the only unusual bout of weather we've had this year, I would shrug it off as an anomaly.

But 2011 has been a doozy of a year overall for unprecedented weather events. Just here in the U.S., off the top of my head, we've had the haboob dust storms in Arizona, the record breaking heat wave and wild fires in Texas, the monster tornadoes in Joplin and Tuscaloosa, the snow melt floods in the Midwest, Hurricane Irene drowning Vermont, and the 1000-year rainstorm we got here in Virginia. And now this.

Just how unprecedented was this latest bout of wacky weather? Here is the Weather Channel with the details:

Newark, NJ - 5.2" on Saturday was the most snow ever recorded on any October day in history. This is also only the second time with measurable snow in October. The last time measurable snow occurred was when just .3" fell on October 22, 1952.

New York, NY (Central Park) - 2.9" on Saturday is the only time in October history that an inch or more of snow has been recorded during the month. This is also just the 4th time in history with measurable snow during the month.

Allentown, PA - 6.8" on Saturday is the largest October snowstorm in history and just the 6th time in history with measurable snow in October.

Harrisburg, PA - 9.7" on Saturday is the largest October snowstorm in history and just the 5th time since 1889 that measurable snow has been recorded in October.

Peru, MA - Received 32", which is the biggest snow total from this storm as of early Sunday morning.

Holy crap...32 inches of snow in October? This could be shaping up to be one hell of a winter. Happy Halloween!
Posted by Bill Hicks at 2:55 PM