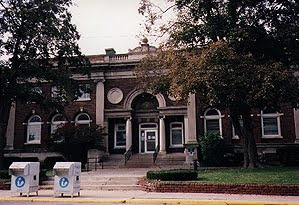 image: the old public library building in Freeport, Illinois, which was built in 1901 and closed in 2004 when it was replaced by a new facility


When I was a kid I spent a lot of time at the library. This was back during the 1970s, before video games, 500 satellite channels and personal computers came to occupy every spare moment of the average child’s free time. Back then, the public library in Freeport, Illinois, was housed in a stately old turn-of-the-20th century brick building with high ceilings and old fashioned light fixtures, and I always used to get a thrill just from walking through the front doors. The place had that unique, musty smell of old books, and the library staff was always friendly and helpful, especially to children. I could spend hours just going through the various shelves looking for something special to read, and I always took it for granted that everyone else felt the same way I did about the place.

Though I did not know this at the time, Freeport's old public library was one of those built around the country by funds donated by Gilded Age businessman and philanthropist Andrew Carneige. According to the Wikipedia entry about Carnegie, he believed in giving to the "industrious and ambitious; not those who need everything done for them, but those who, being most anxious and able to help themselves, deserve and will be benefited by help from others." All in all, 2,509 "Carnegie Libraries" were built in the United States between 1883 and 1929.

Years later after I had graduated from college and moved to the big city to start my career, I became prosperous enough to buy any book I wanted to read and sort of fell out of the habit of visiting the local library. This became even more true after the rise of the Internet, which meant I no longer needed to go there in order to access reference books and encyclopedias. Nowadays, I still have a library card, but on those rare occasions when I visit my local branch I am more likely to be donating books for one of its periodic fundraising sales rather than checking one out.

I’ve also noticed that despite the fact that Fairfax County, Virginia, where I now reside, is one of the wealthiest locales in the country on a per-capita income basis, library hours have been drastically cut back. Our local branch is now closed on Sundays, only open a half-day on Saturdays and on weekdays it is open for precisely eight hours each day on a varying schedule. Several times I have gone there and been surprised to find it closed during what would be considered normal business hours.

Most people that live in my county probably consider this to be nothing more than an inconvenience, if they think about it at all. They all have the latest laptops and iPhones, with a world of information constantly available at their fingertips, so what do they care? This could be why public library funding is one of the first things to get the axe whenever state and local governments are making budget cutbacks. Most local politicians come from the same economic class as I do, and undoubtedly view the library as an arcane public service that, like the post office, no longer has the value it once did.

Such myopic thinking at a time when our economy is undergoing a slow motion collapse is exactly how America came to be in its current predicament. The decision makers cutting library budgets do not stop for one minute to think about what life would be like for them if they could not afford that fancy laptop, iPhone, Kindle or regular high speed internet service. This very point was made in a recent Chicago Tribune article:


When Charles Mason was laid off from his job as a truck driver two years ago, he turned to the Chicago Public Library, scouring the Internet for a new driving job that could support his family better than his meager unemployment check.

Though back at work now, he almost daily visits the library, where his children study and his wife, who works as a clerk, can earn a paycheck.

At a time when libraries have become a beacon for job-seekers like Mason, the city is proposing reduced hours and hundreds of staff layoffs to shore up its own budget.

The cuts come despite library visitors continuing to rise on a statewide and national level, though Chicago has seen a drop in visitors overall in recent years after library hours were cut.

Nationwide, there were 1.5 billion library visits in fiscal year 2008, the most recent year available. That's up from 1.28 billion in 2003 and 1.09 billion in 1998, according to studies by the Institute of Museum and Library Services and National Center for Education Statistics. Illinois followed the same trend with 77.6 million visitors in fiscal year 2008, up from 63.9 million in 2003 and 57.1 million in 1998, the studies showed.

Experts attribute the increases to patrons looking for jobs, belt-tighteners choosing to borrow books instead of buying them and libraries' growing digital collections.


It should be pretty obvious from those statistics that about the LAST service local governments should be cutting out are libraries. Not only are they a vital public service in a country when the median income is a mere $26,364 per year, but they also function as one of those few places where people can gather with members of their local community. And with brick-and-mortar book stores rapidly being consigned to the dustbin of history, they are one of the few remaining places where you can actually go and BROWSE through a shelf of books. What a concept.

Sadly, I expect that exactly the opposite will occur. Not only are libraries a tax “burden,” their support requires the kind of belief in the common good that has come to be in all too short supply these days. As the financial squeeze for state and local governments continues to get worse, libraries will likely be among the first municipal services to be terminated completely, for such shortsightedness and selfishness has become the norm in these waning days of the American empire. Andrew Carnegie, grandfather figure as he is to today's billionaires, is no doubt rolling over in his grave.
Posted by Bill Hicks at 7:03 AM