Legacy of a Decade at War: One Million Jobless Veterans 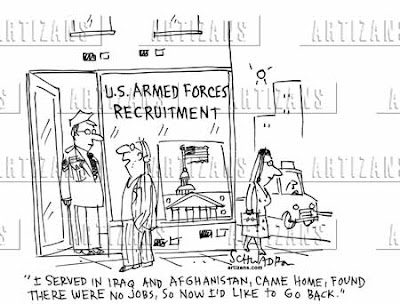 Were there a college course entitled, Rules of Empire 101, I would imagine that one of the top items on the syllabus would be: Take Care of Your Veterans. For the last thing any young Caesar needs is a bunch of idle, disaffected former soldiers circulating among the civilian population, waiting for an excuse to rise up against the regime.

Well, America's so-called "leaders" must have been playing hooky the day the professor covered this topic, as evidenced by an article published Friday by the McClatchy Newspapers:


A million veterans already are unemployed, and more than a million are expected to leave the military by 2016. Julius Clemente, 33, an Iraq veteran from Kirkland, told a congressional panel Thursday there will be "systematic chaos" if more can't find jobs or get help going to college.

"The path we now face from the military to college — life is more complicated and challenging than what I thought," Clemente told lawmakers.

Congress appears eager to respond, though there's no consensus on a specific plan.

I have an idea for you, Mr. Clemente. Instead of wasting your time participating in that three ring circus up on Capitol Hill, you and your unemployed comrades need to join the Occupy Wall Street protests. All you are going to get from the politicos is a bunch of hot air blown up your skirts.

Don't believe that? Well, here's a quote from that same article:

"We've just got to find a way to highlight that to corporate America," he said.

Oh, and lest you think I'm being partisan:


At a meeting of the Senate Veterans' Affairs Committee, Sen. Patty Murray, D-Wash., the chairwoman, called veterans "the most employable group of people in the world."

"They know how to show up for work for time, they've got tremendous skills, and they have great attitudes," she said. "And they have just so much to offer to our country."

Since I'm a vet myself, I'll speak to you in a language you'll understand. What you just witnessed is a classic dog-and-pony-show. It should be obvious by those two pandering quotes that when the cameras are shut off and the media goes home Congress is going to go right back to doing what it does best: nothing.

The quicker you accept the fact that your military service has in no way, shape or form made you any more valuable to the elite scumbags who completely own this country, the better off you will be. If you still don't believe me, I suggest you read up on the history of what happened to The Bonus Army of World War One veterans during the Great Depression. You'll likely find it to be quite enlightening.
Posted by Bill Hicks at 8:40 AM