Riding the School Bus May Be About to Become a Thing of the Past, Part 2 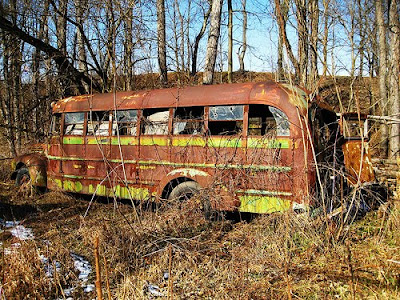 Back on August 11th of last year, I wrote a post called "Riding the School Bus is Apparently About to Become a Thing of the Past," which included a story about a school district in Arizona that was discontinuing bus service for its students. Now the same problem is being faced by schools across California as the state is ending busing subsidies for local school districts. Here is California Watch with the details:


There are no sidewalks, bike lanes or public transportation in Forks of Salmon, a tiny, forest-shrouded community deep in the mountains of Siskiyou County. For seven of the 10 students at Forks of Salmon Elementary School, getting to class means taking a 45-minute school bus ride on 18 miles of a narrow, two-lane road that twists and turns with the Salmon River.

Until this month, most of the $32,000 the school spends each year to bus students was covered by the state. But now, Forks of Salmon and other rural school districts are grappling with how to keep their buses running. Last week, Gov. Jerry Brown proposed eliminating school transportation funding [PDF] next year, just weeks after announcing trigger cuts that wiped out $248 million for buses this year.

California does not require school districts to provide home-to-school transportation, except for certain special education students and those who are severely disabled or orthopedically impaired; less than 16 percent of students statewide ride school buses. But ridership is significantly higher in many rural areas, where sparsely populated, sprawling communities necessitate bus service, officials say.

"If we don't have transportation, we don't have school," said Tina Bennett, Forks of Salmon's superintendent, who also serves as its principal, first-through-third-grade teacher and bus driver.

The nearest gas station to Forks of Salmon charges $4.95 a gallon, and the roads, prone to rockslides and slick with ice in the winter, often are dangerous to drive. Not all families can afford or feel comfortable driving under those conditions, Bennett said.

Well, it sounds to me like those families are going to need to reconsider their options. But that isn't how some folks see it:


"It just doesn't seem equitable," said Stephanie Siddens, superintendent and principal of Bonny Doon Elementary School in Santa Cruz County, which used to receive about 72 percent of its transportation funds from the state. "Just because we provide transportation and we need it, we get cut more."

Sorry to be the one to break this to you, Ms. Siddens, but the state of California is broke and cuts have to be made SOMEWHERE. That's a fact, and there is no use crying about it.

In fact, I'll go you one further. If you are residing in a rural community you are going to have to accept the fact that it is time to start becoming self-sufficient and not count on expensive government services to be there for you anymore. In this instance, that probably means home schooling your children if you can no longer afford to drive them to school yourself. If you aren't prepared to do that, perhaps you should reconsider living in a locale where services are likely to break down sooner rather than later. On top of losing your school buses, you're probably going to be losing your rural post offices fairly soon as well.

Are you ready for that? Because if not, I'd consider moving. If there is ANYBODY who needs recognize that the time is quickly coming when they are going to need to be able to survive in the peak oil era with reduced or no government services supporting them, it is those who live the farthest from where those services are being provided.