Swap-O-Matic: A Vending Machine Based on the Barter Economy 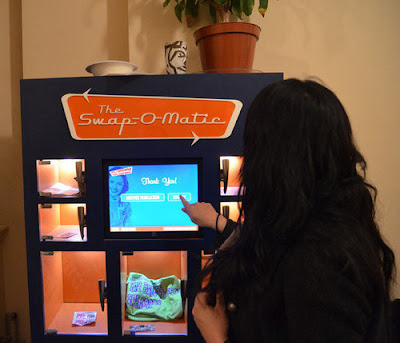 On the one hand, the media keeps telling us our consumer-based economy is is getting better, then on the other hand they report individual stories which prove exactly the opposite. Here is the latest such story from MSNBC:


There are about 7 million vending machines in America. And what do the vast majority of them sell? Sodas and sodium- or sugar-heavy snacks (which aren’t good for you), packaged in plastic or PET and shipped around the country (which isn’t good for the planet). We’ve all used vending machines. But despite their convenience, they certainly aren’t a solution to humanity’s problems.

Or are they? The Swap-o-Matic, created by the New York City-based designer Lina Fenequito, is a vending machine that lets you “recycle things you no longer need and get things you want — all for free.” You create a Swap-o-Matic account by entering an email address on the machine’s touch screen. You’re then issued three credits. You can earn more credits by donating items to the machine and spend them by getting items in the machine that someone else has donated.

Fenequito, who worked for Americorps before earning an MFA at Parsons School of Design, says the project is about promoting “a shift in culture away from an emphasis on unconscious consumption towards a more sustainable way of life through reusing and trading.”

The Swap-o-Matic is currently migrating around New York City. You can look up its location on the project’s website and, if you’re in New York, drop by to donate or peruse what’s available. Soon you’ll be able to see what’s in the machine online as well.

Before I continue, let me just say that I think this is a great idea--one that is long overdue, in fact. Hopefully, these machines will catch on and spread quickly around the country.

As an economic indicator, however, it is yet another sign that there has been a sea change. Modern America is a throwaway society. Use it up quickly and dump it in the landfill. That's the very mantra of consumerism.

Few except the downtrodden and the small percentage of people who consciously do not play the consumerist game actually seek out used goods, even though it more than makes sense from a personal finance standpoint. The fact that a business such is this is starting up and seems to have bright prospects is a very telling indicator.


Bonus: The Boss understood the consumerist dream - "Mister, on the day the lottery I win, I ain't ever gonna ride in no used car again"