The Mohegan Sun Casino is $1.6 Billion in Debt 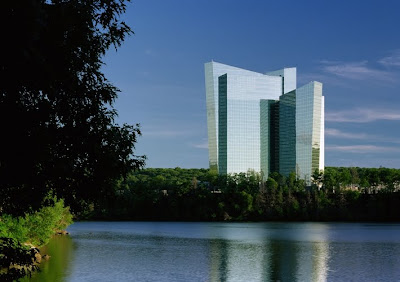 In yet another blow for state and local governments who think more legalized gambling is a great way to increase tax revenues comes a story from the Norwich Bulletin about deep financial problems being experienced by the Mohegan Sun casino in Connecticut:


The parent entity of Mohegan Sun recently received a waiver from its bankers, something the casino operator sees as a vote of confidence in its future. Yet it could be the calm before a major storm in Connecticut’s economy in 2012, an analyst said.

Foxwoods Resort Casino, whose parent also is in talks to restructure debt, and Mohegan Sun are on course for severe financial problems in the year ahead, said Clyde Barrow, a University of Massachusetts Dartmouth professor of public policy who follows the New England casino industry.

The Mohegan Tribal Gaming Authority was unable to complete a refinancing agreement during its fiscal first quarter, which ended today. With that, the authority’s auditors attached a “going concern” warning to 2011 financial statements, authority CEO Mitchell Etess said Thursday.

A filing with the Securities and Exchange Commission said lack of a resolution would materially impair Mohegan Sun’s ability to operate.

So just how bad is it?


Mohegan’s total debt as of Sept. 30 was $1.6 billion, the authority reported. Of that, $811.1 million comes due within the next 12 months, including $535 million that needs to be paid by March 9 and $250 million in 8 percent notes that mature on April 1. This debt will need to be refinanced before the due dates, the authority said Thursday.

So what are the overall implications for the Nutmeg State?


Foxwoods and Mohegan Sun are two of Connecticut’s largest employers and major sources of revenue to the state government. Both are members of the Chamber of Commerce of Eastern Connecticut. Chamber President and CEO Tony Sheridan declined to comment on the Sun’s finances Friday, saying he was still studying them.

What is there to study, exactly? The casinos are deep in debt, and unless there is a miraculous economic recovery they are soon going to have to declare bankruptcy. Looks like Chamber of Commerce President and CEO Tony Sheridan is about to find out what Las Vegas already knows: a gambling-based economy is only sustainable so long as the marks still have money in their pockets. As the old saying goes, you can't get blood out of a stone.
Posted by Bill Hicks at 12:53 PM