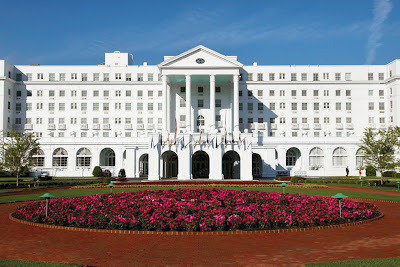 For those who may not be familiar with it, West Virginia's Greenbrier Resort is a premier vacation destination in The Mountain State. But according to MSN Money, the swanky recreation spot is now experiencing financial hard times:

"You hate it like crazy," Justice said of the layoffs, the Charleston Gazette reported Saturday. "You wish to goodness you didn't have to lay anybody off, that's for sure."

Okay, that's a refreshingly candid attitude for a managerial type to have in one of these situations. But is he actually a part of the problem?


The former coal executive has been sinking his own personal fortune into renovating and revitalizing the National Historic Landmark since he bought the property from CSX Transportation for $20.1 million in 2009.

Last summer, he announced he was teaming up with several prominent physicians and a health care developer to build the $250 million Greenbrier Medical Institute, featuring a sports medicine and rehabilitation center, a cosmetic surgery center with a "lifestyle enhancement academy."

And this summer, he plans to offer luxury train service from Union Station in Washington, D.C., at a price of $650 round-trip.

A $15 million investment, The Greenbrier Presidential Express is aimed at bringing back the glamour of train travel. Its 15 cars will include a VIP suite car with private rooms, parlor cars, dining cars and an open-air car with safety railings.

Well, the dude is a visionary, I'll give him that. Too bad he is setting himself up for a MASSIVE failure. Mr. Justice may not have gotten the word, but budget austerity is all the rage in the Imperial Capital these days. That means that even in this area of relative economic prosperity, there are soon going to be fewer people who can afford to blow $650 for a train ride and then $450 a night (a typical room rate, according to the Greenbrier website) to stay at his resort. Demonstrating yet again that just because you're rich, it doesn't mean you have any clue about what's coming.


Bonus: Maybe Jim Justice would be better off just hiring a caretaker