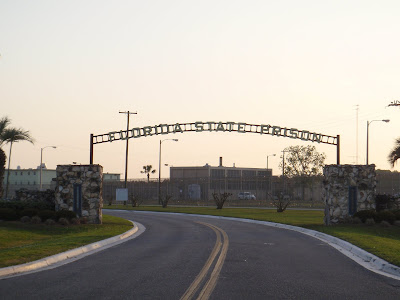 Yesterday I posted a story about the latest factory closing in my hometown of Freeport, Illinois, and the devastating effect it is going to have on the local community. Like many rust belt towns, Freeport was chosen as the site of a state prison back in the 1990s, which was built there in part to try to make up for some of the factory jobs that were leaving thanks to rampant globalization. One could question the effects on the self-esteem of former factory workers who are used to building useful things being relegated to warehousing the worst elements of hour society for half or even less of their former salary, but that's a discussion for another day.

Instead, I'm more concerned with what happens to those factory workers-turned prison guards once the state decides it can no longer afford to maintain such a large prison population. That is happening to one Florida town in particular, as reported this week by Tallahassee.com:

But the head of Florida’s prison system said there can’t be any reprieves for the seven prisons and four work camps he announced last week will be closing before June 30. Department of Corrections Secretary Ken Tucker said a detailed business analysis was used to evaluate each institution and that his agency will do all it can to transfer some employees and help find jobs in other state or local agencies for others.

“We are a community on life support and this decision will equate to pulling the plug on us,” Kirk Reams, the clerk of court and chief financial officer for the county, told the House Justice Appropriations Subcommittee.

Jefferson Correctional Institution, with 177 state jobs, was on the list Tucker announced last week. It is the county’s largest employer, with an $8.2 million payroll.

Julie Conley, executive director of the county’s Economic Development Council, said that figure multiplies by four as the money is spent in the Monticello area. She said the county’s budget is about $20 million.

County Commissioner Stephen Fulford said hundreds of Jefferson County residents work at state jobs in Tallahassee. He said many of them are fearful of losing their jobs in Gov. Rick Scott’s new budget proposal, which is projected to result in about 600 layoffs statewide next June 30 — apart from the prison closings.

How sad is it that a community has become so destitute that its last life line depends upon the state continuing to pay to keep people locked up? Sadly, this is the entirely predictable end result of 30 years of unfettered globalization now combining with the effects of peak oil to create a perfect economic shit storm.

Still, some will yell and scream that it isn't fair:


“If you don’t consider the economic impact on people who live in an area, I think that’s a serious flaw,” said Rep. Leonard Bembry, D-Greenville, a committee member who represents Jefferson County. He said JCI accounts for 5.5 percent of all employment in Jefferson County and that, while Hillsborough or Broward County might be able to absorb layoffs in big urban areas, Jefferson cannot.

“That would be like Orlando shutting down Disney,” said Bembry.

But frankly, my Dear Mr. Bembry, reality doesn't give a damn:


Tucker said the department considered personnel impact, along with other dollars-and-cents realities of its decision. The closings are projected to save $14 million in this fiscal year and $75 million in the year starting July 1.

“It’s hard to make the case that we need to maintain personnel and beds for inmates that we’re not going to have,” said Tucker. “We’re holding empty dorms at this prison and that prison, all across the state.

Bonus: Todd Snider with the best prison song this side of Johnny Cash