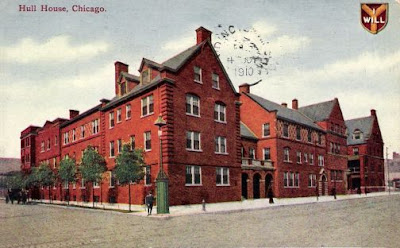 One of the sadder stories to arise from the ongoing slow motion economic collapse was reported Friday when it was announced that the Hull House, the 19th century charity formed by the famed Chicago icon, Jane Addams, is closing down. Here is the Washington Post with the details:

The agency said the poor economy resulted in more demand for its services but also made it harder to raise money to cover its costs. Hull House has been providing child care, job training, housing assistance and other services for 60,000 people a year in the Chicago area.

The agency had announced plans to close in the spring, but Friday’s shutdown was unexpected, striking some 300 employees with a devastating and unexpected blow. They received layoff notices and final paychecks and then spent the day packing their belongings and saying tearful good-byes. Many said they were startled to learn their insurance ended almost two weeks ago.

“It’s been my life,” said Dianne Turner, who spent 25 years teaching families in Chicago housing projects how to break the cycle of poverty. “It wasn’t about the pay. It was about seeing a family go from feeling hopeless to being hopeful and feeling like they can do things.”Chicago’s Hull House, founded by Jane Addams, closes doors after more than 120 years

Turner said she knows what it’s like to live in the projects and dream of something better. She got her first job as a teenager through Hull House and said the organization helped teach her the value of education, how to save money and how to be a leader.

Founded in 1889, Hull House was the best known of the 400 settlement houses in the United States in the early 1900s. The settlements were designed to provide services to immigrants and the poor while uplifting them through culture, education and recreation. At its peak, Hull House served more than 9,000 people a week, offering medical help, an art gallery, citizenship classes, a gardening club and a gym with sports programs.

Of course, the middle of the worst economic downturn since the Great Depression is about the very worst time for this to happen. And note, too, the completely shabby way that the employees were treated. Jane Addams must be rolling over in her grave. The fact that this happened the same week as Obama's State of the Union speech in the very city he calls home could not be more fittingly symbolic.
Posted by Bill Hicks at 5:10 PM