Another Mission Accomplished: 12,000 Mexicans Died in the War on Drugs in 2011 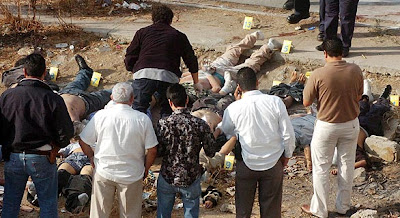 Sigh. Another year has passed and the drug related violence in Mexico just keeps on increasing. Since 2006, about as many Mexicans have been killed in the war on drugs as Americans who were killed during this nation's entire involvement in the Vietnam War. Here is the Raw Story with the gruesome details:


Some 12,000 people died in drug-related violence in 2011 in Mexico and around 50,000 have been killed since the start of President Felipe Calderon’s crackdown on drug gangs in 2006, media reported Monday.

The reports came out as brutal violence continued to rock parts of Mexico amid a military crackdown on organized crime involving tens of thousands of troops.

Reforma daily counted 12,539 drug-related killings in 2011, which it said was a 6.3 percent increase on the previous year.

It said the violence had become more brutal with increases in beheadings — to almost 600 — and more than 1,000 cases of torture.

Daily Milenio recorded 12,284 drug-related deaths in 2011 and underlined major hikes in violence in the Pacific coast state of Guerrero and the Gulf of Mexico state of Veracruz, where 35 bodies were dumped under a busy overpass in one incident alone.

Mexico's total population is around one-third that of the U.S., so this would be the equivalent of 36,000 Americans being killed in the past year and 150,000 slaughtered in the past five. Yet despite the carnage there has been exactly zero indication that the U.S. government is interested in reducing the violence by ending the drug war insanity. Sadly, as long as most of the killings are taking place "over there" most Americans just don't give a damn.
Posted by Bill Hicks at 12:26 PM