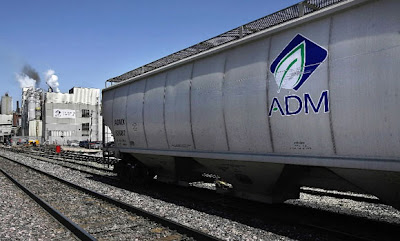 More job loss fun in the agriculture sector was had when it was announced today that agribusiness giant Archer Daniels Midland is going to lay off 1,000 employees. Here is Market Watch with the details:


Archer Daniels Midland said Wednesday that it will slash about 1,000 jobs, or roughly 3% of its total workforce, in an effort to cut costs and boost profit. Most of the positions set to be eliminated are salaried, and the cuts are expected to reduce the company's costs by $100 million a year.

The announcement was accompanied by some classic corporate FlackSpeak:


"To ensure that we can continue to compete effectively in our global markets, we are taking actions to streamline our organization and achieve significant, sustained cost reductions," said Patricia Woertz, ADM's chief executive, in announcing the plan. "These actions will help us enhance our productivity and earnings power."

Woertz then added: "Because after we get rid of these 1,000 losers, those who are left will be so scared of being next on the chopping block that they won't mind taking up the slack. As for me, I'll be in my office preparing my golden parachute."


Bonus: Dedicated to Archer Daniel Midlands Chief Executive Patricia Woertz..."Every single meeting with his so-called superior is a humiliating kick in the crotch"