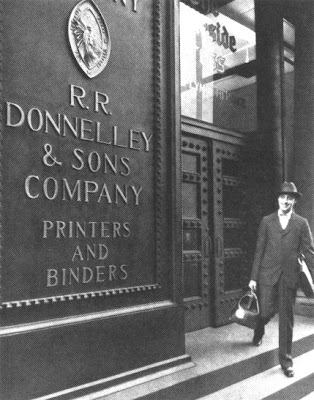 Sometimes the CEOs of big corporations will try to sugarcoat the fact that they are actually laying off their employees out of sheer greed. At other times, however, they will simply extend a big middle digit to the workers and communities they destroy in order to line their own pockets. As reported by the Hartford Courant last week, one unfortunate Connecticut town is about to experience the latter:


RR Donnelley & Sons, a $10.6 billion global printing company, is closing its Windsor location in March, putting 117 people out of work.

In a press release that same day, the CEO told investors that 2011's cash flow would be better than previously projected — instead of having $600 million in profits (not counting capital expenditures, taxes and debt service), it will have $650 million to $700 million.

In its third-quarter earnings report, the company said profits tripled from the same time last year, and sales increased 8 percent.


So what did the CEO have to say for himself about the layoffs?


"We continue to have success in the marketplace, winning new work and expanding customer relationships. Given the challenging global economic environment and sluggish financial markets activity, we are pleased with our results," said Thomas J. Quinlan III, RR Donnelley's president and chief executive officer. According to Forbes Magazine, he was paid $2.64 million in 2010, and owns $6 million in stock in the company.

There you go, Occupiers. If you need yet another corporate poster child scumbag to highlight why you are doing what are doing, R.R. Donnelley President and CEO Thomas J. Quinlan III just gave you the perfect gift.


Bonus: "I never understood why the people of France cut off Marie Antoinette's head. Now I fucking GET IT"