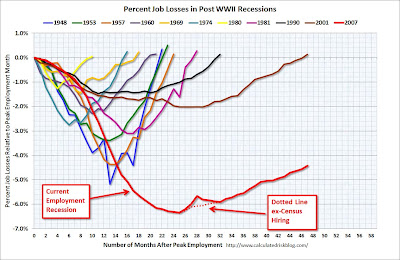 This big news last Friday was that the monthly unemployment figures from the Bureau of Labor Lying Statistics showed that America allegedly added 200,000 jobs in December. I say "allegedly" because the BLS has fudged the numbers so thoroughly over the years through its use of the Birth-Death Model adjustment that the real totals are impossible to know for sure. There is little doubt, however, that the massive job losses experienced early during the Great Recession, especially in late 2008/early 2009, have abated. Instead, we have entered a long period of no-to-sluggish job growth that has left many millions of former workers out in the cold.

For purposes of this post, I beg your indulgence and ask you to treat the BLS numbers as if they are accurate, because while they may be suspect they do at least have some basis in reality. Since the beginning of the downturn, the excellent economic site Calculated Risk has been charting the official jobs numbers as a percentage of the number of jobs there were in December 2007, which was the month before the downturn officially began, and then comparing that negative percentage to previous post-World War II recessions. As you can see by the chart above, not only was the current downturn at its deepest worse than any which preceded it, we have now entered uncharted territory in that it is also the longest we've gone since the Great Depression without regaining at least as many jobs as were lost during a recession period.

Shockingly, we still stand around 4.5% below the December 2007 total job figure, having only regained about one-quarter of the losses since we began to leave behind the deepest depths of the job downturn around a year-and-a-half ago. That means that even if the economy keeps adding jobs at the pace it has since the downturn's low point, it will take over four more years just to get us back to zero. By that time it will have been more than eight full years since the downturn started during which the U.S. population will have increased by at least 20 million people.

Unfortunately, that is also the BEST case scenario. More likely than America continuing to steadily add jobs over the next four years is that at some point there will be a double dip recession, which reverses the direction of that red line and starts it downward again. There are so many factors creating headwinds for the economy that there is no way that doesn't happen.

Another factor the chart does not show is the declining quality of the jobs that ARE being created. Many of the jobs that were lost during this downturn were good paying positions that enabled their holders to live a middle class lifestyle. Many of the replacement jobs, however, pay far less and have little or no benefits like health care attached to them. For a consumer based economy, this is a long term disaster, even if the recent trends in job creation do not reverse anytime soon.

So this is where we stand in January 2012, four years into The Long Emergency, as the world holds its breath waiting to see how the Iranian nuclear standoff, the European debt crisis and the popping of the Chinese real estate bubble play out.