Memo to Blockbuster Video: Give it UP, Already 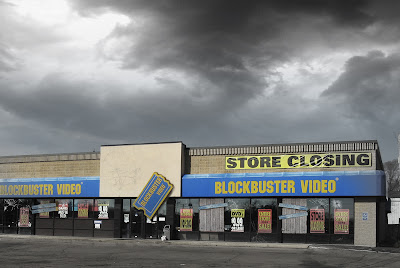 One of the more interesting examples of a corporation refusing to acknowledge reality and just die already is the slow motion collapse of Blockbuster Video. The chain has been steadily closing locations for years as On Demand, Netflix and now downloading have utterly destroyed its brick and mortar business model. Of course, that was after the chain itself ran most of the mom-and-pop video stores around the country out of business. Here is the Minneapolis Star Tribune with the details of Blockbuster's latest woes in Minnesota:


Facing stiff competition from online movie retailers such as Netflix, Blockbuster said it plans to close 10 Twin Cities-area stores and one in Duluth in the next several months.

The Wayzata store will shut its doors at the end of January. Apple Valley, Cottage Grove, Columbia Heights and Eden Prairie are scheduled to close in mid-February. Stores in Hudson, Wis., Woodbury, Blaine, Savage, New Hope and Duluth will go out of business in March.

Several of those stores already have stopped renting movies, but are open for sales of CDs and other merchandise.

The company, based in the Dallas suburb of McKinney, Texas, wouldn't discuss details but said its stores can close for various reasons, including the loss of a lease and issues with the size of a store. Blockbuster went into bankruptcy in 2010 and was purchased in 2011 by Dish Network Corp., which now operates Blockbuster as a subsidiary.

Not long ago, Blockbuster and other movie rental companies were ubiquitous, but the digital age is allowing consumers to access movies and games in many other ways, including online, through cable providers and via subscription.

You gotta love that weaselly answer about stores closing for "various reasons." There is only one reason a national chain closes a store location: it isn't making enough money to cover the rent, employee salaries and other expenses. So many Blockbuster locations have closed around my area that I couldn't tell you where the nearest one is anymore. It is long past time for Blockbuster to concede to reality and put itself out of its own misery.
Posted by Bill Hicks at 12:21 PM