MSNBC Shocked, SHOCKED to Learn that CEOs Rake in Huge Sums When Their Companies Go Bankrupt 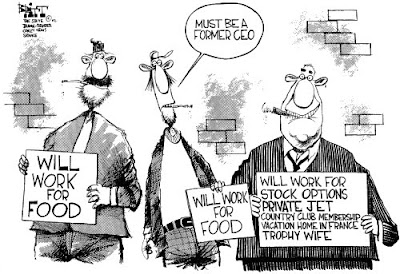 In a properly functioning market economy, when a corporation is forced into bankruptcy the top management of said corporation would pay a very large financial penalty in terms of their pay and benefits. That is the whole foundation of our supposedly risk-reward capitalist system. Not in modern day America, however. Instead, we have evolved into a crony capitalist system in which it has become virtually impossible for those at the top to fail, however bad their decisions may be. What's more, this is true even in industries that don't receive massive government bailouts.

But wait, Bill, I hear you asking. Isn't that the case only in the Too Big To Fail sectors?

Sadly not, as reported this past weekend by MSNBC:


When companies go bankrupt, the misery is shared among many: Bond holders are wiped out, retirees see their pensions and benefits vanish, and employees lose their jobs.

But some feel no pain at all: CEOs and other top executives of companies that go through Chapter 11 receive robust compensation in the form of salary, stock grants and other benefits.

In some cases, they earn even more money than they did before the filing, even while other stakeholders suffer. It's the most unlikely fast-track to a fat payout ever, and it goes on in spite of federal legislation meant to crack down on corporate honchos feasting while everyone else fights over crumbs.

It wasn't supposed to be like this. In the wake of corporate catastrophes such as Enron, Congress passed legislation aimed at preventing companies from paying retention bonuses to executives at firms going through Chapter 11.

That distinction has become a loophole. Since the law allows performance-based incentives, huge executive payouts have morphed over the years to be little more than retention bonuses by another name, according to critics who say executives net outsized payouts even when they negotiate agreements that leave stakeholders out in the cold.

"There seems to be no sense of accountability at this level," said Steven Kropp, a professor at Roger Williams University School of Law. "In most of these cases, the unsecured creditors aren't being paid back in full, employees are being laid off, and in addition, they're finding their health insurance and pensions diminished." An investigation by The Wall Street Journal found that median compensation of CEOs at 21 companies that filed for bankruptcy was $8.7 million, just $400,000 less than the median compensation earned by CEOs at healthy companies.

Taking off my shoes and socks to do the math on that last data point reveals that the CEOs of bankrupt companies on average are paid just 4.5% less than those at non-bankrupt firms. Obviously, driving your company into the ground, usually in pursuit of a short term boost in revenue that can be used to pack your golden parachute, has virtually no negative ramifications to CEO pay anymore.

So how does this shit happen?


Companies are required to go to court and argue their case for big bonuses with the bankruptcy judge, explaining why the CEO deserves the set level of compensation and what targets they must meet in order to earn their bonus. The problem is that often the bar is set so low that even lackluster performance will be measured as success.

"It's all fine and well to say you're going to pay people for performance, but the key is what kind of performance," Jackson said. "It's very hard for a judge to know if an earnings target is easy or hard to hit. Are they just window dressings?" To make this determination, the court has to rely on evidence from the company's executives and lawyers, who may have an incentive to give themselves easy assignments.

Judges also have to rely on the input of compensation experts — also hired by the company — to know if the bonuses being proposed are appropriate for the industry and the task at hand, which also raises the prospect of manipulation.

In other words, it is a completely incestuous system from top to bottom. But wait, I hear you protesting. Why don't the shareholders object? After all, aren't they the ones being most negatively affected?


He said key stakeholders want a "bankruptcy guru," and they're willing to shell out enormous sums for the services of a CEO they think can pull the most money out of a troubled company. The catch is that this slate of decision-makers increasingly includes big creditors, negotiating with the kind of clout once limited to shareholders. What a creditor sees as the best return on its investment may very well be a bloodbath for the company's rank-and-file.

In other words, once again we see the "heads they win, tails you lose" dynamic at work. The system has become so totally gamed by the elites that it no longer matters to them whether a troubled company survives as an ongoing concern. If the company ultimately fails due to impossible market conditions created by peak oil, or the relentless off-shoring of decent paying jobs by corporate America, or because the CEO has never worked in that particular industry and has no fucking clue as to what they are doing, it doesn't matter at all to the big money boys. They'll just strip away the assets and leave a hollowed out husk...and then move on to the next ripe, juicy target. So while it was nice of MSNBC to treat this as a news story, it really shouldn't have been a surprise to anyone.


Bonus: "You get your money for nothing...and your chicks for free"